As lawmakers ask for more information from the Bush administration on progress in Iraq, Sen. John Warner (R-VA) suggests that President Bush should follow the lead of Franklin Delano Roosevelt and hold "fireside chats" with Americans. 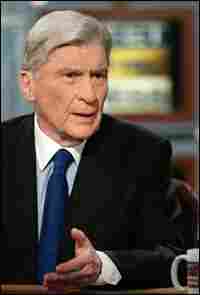 President Bush plans a speech this week at the US Naval Academy in Maryland. His subject will be the war on terror, and the talk comes after members of his own party asked for more information about progress in Iraq.

This month, the Senate voted to compel the administration to provide quarterly reports on policy and military operations in Iraq. And yesterday, the Republican chairman of the Senate Armed Services Committee made another suggestion. Senator John Warner of Virginia said the president could follow the example of another wartime leader. In the days before television was widespread, Franklin Delano Roosevelt used his famous Fireside Chats to explain the war as he saw it over the radio. Warner is a World War II veteran and speaking on NBC, he said President Bush could do something similar.

Senator JOHN WARNER (Republican, Virginia): I think it would be to Bush's advantage, it would bring him closer to the people, dispel some of this concern that, understandably, our people have about the loss of life and limb, the enormous cost of this war to the American public.

INSKEEP: Senator Warner is hoping the president can do more to persuade an increasingly skeptical public. A CNN/USA Today/Gallup Poll this month found that 63 percent of Americans disapproved of the president's handling of the war. Just 35 percent approved.