Accessibility links
Busiest Hurricane Season Ends with New Storm Wednesday marks the end of the busiest Atlantic hurricane season on record. Weather forecasters added one more storm to the list Tuesday: Tropical Storm Epsilon, which is moving over the central Atlantic. It is the 26th named storm of the season. 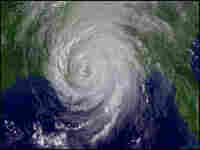 Hurricane Katrina made landfall in the Gulf Coast on August 29, 2005. NOAA hide caption 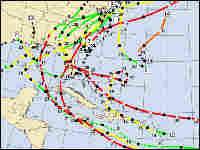 There were 15 named tropical storms and hurricanes last year, their paths seen in this image. This year, 29 storms have already been named. NOAA hide caption

Wednesday, Nov. 30, marks the end of the busiest Atlantic hurricane season on record.

There have been 26 named storms this season. The most recent one, Tropical Storm Epsilon, formed in the Central Atlantic on Tuesday.

Forecasters say they expected a busy season. But National Weather Service director David Johnson said at a press conference Tuesday that 2005 was unlike any year in memory.

Johnson told reporters that the weather service starts each hurricane season with a list of 21 names for storms.

The season included 13 hurricanes. Four of them -- Dennis, Katrina, Rita and Wilma -- struck the United States. Insurance companies expect the economic losses from those storms to be the largest in history.

Katrina was also the deadliest hurricane since 1928. It killed at least 1,300 people.

"The track forecasts for 2005 may set new accuracy records," said Conrad Lautenbacher, administrator of the National Oceanic and Atmospheric Administration (NOAA). "The error has been reduced by 50 percent over what we used to report 15 years ago."

That means forecasters can predict a storm's path within tens of miles instead of hundreds of miles, he said.

NOAA used its press conference -- held simultaneously in Miami and Washington D.C. -- to publicize a range of achievements at the agency. One is long-term forecasting.

Back in May, the agency predicted that 2005 was likely to be a big year. In early August, NOAA updated that forecast to allow for the possibility of a record-breaking year.

Despite NOAA's notable successes, there are hurricane experts who take issue with some of the agency's claims.

For example, Kerry Emanuel, a professor of atmospheric science at MIT, says the accuracy of this year's seasonal forecast may have depended on luck as well as skill.

"We were all right for probably the wrong reasons," Emanuel said.

Forecasters expected a lot of storms to come from an area between the eastern Caribbean and Africa, he said, "Yet that isn't where the big hurricanes of the season developed. Very few of them developed there. Katrina and Rita and Wilma did not develop in that region."

Instead, those storms developed further west. Government scientists say that wasn't a big surprise, and doesn't undercut the accuracy of their forecast.

Emanuel has another disagreement with government scientists. He thinks they've been too quick to dismiss the role of global warming in hurricanes.

NOAA puts all the blame on something called the multidecadal signal -- a historical pattern in which several decades of high hurricane activity are followed by several quiet decades.

"The data shows very clearly that this is the tropical multidecadal signal," Bell said. "We see absolutely no indication whatsoever that greenhouse warming is causing any of it.

Emanuel isn't convinced, though. "That may turn out to be the case on further examination," he said. "But some of the rest of us looking at this see those cycles plus a global warming signal.

There's little disagreement about what the United States can expect for the next decade or so: lots of tropical storms and lots of hurricanes. And the possibility of another year of record-breaking devastation.