Stan Berenstain, creator of the beloved children's book series about the Berenstain Bears, died Nov. 24. Peter Glassman, owner of the children's bookstore Books of Wonder, explains the impact and success of the books. 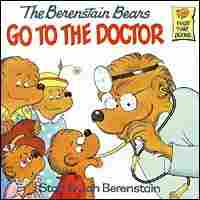 Stan Berenstain and his wife Jan created the voluminous "Berenstain Bears" series of children's books, some 250 titles in all. Random House hide caption

Children's book author Stan Berenstain has died at the age of 82. With his wife Jan, Berenstain created the voluminous Berenstain Bears series of children's books. And I do mean voluminous, some 250 books in all, starting in 1962 with "The Big Honey Hunt." Those books spawned a television show on PBS.

Unidentified Group: (Singing) Somewhere deep in bear country lives the Berenstain Bears family. They're kind of furry around the torso. They're a lot like people, only more so.

BLOCK: Stan and Jan Berenstain met on the first day of art school in 1941. Stan once told an interviewer about his earliest drawings.

Mr. STAN BERENSTAIN (Author, Illustrator): I began drawing when I was a tiny little kid, four or five years old. I didn't have any sense of what an artist was. I just used to take the brown paper bags in my grandmother's Army-Navy store and the big red marking crayon and draw pictures on it. My mother remembers them as being masterful, you know, Michelangelo no less, but I'm pretty sure they were scribbles.

And, Mr. Glassman, are these Berenstain books big sellers still after all these years?

Mr. PETER GLASSMAN (Owner, Books of Wonder): Well, certainly the classics are, like "The Big Honey Hunt," "The Bike Lesson," "B is for Bear." A couple of generations now have grown up on them.

BLOCK: What's the appeal, do you think?

Mr. GLASSMAN: Well, I think, particularly with the early ones, Jan and Stan had an amazing ability to capture the family dynamic that even a small child was aware of, the parent who blusters perhaps a little bit more than necessary.

BLOCK: That would be the bumbling father.

Mr. GLASSMAN: Exactly. The mother who's there to comfort and, of course, the child who's eager to get out and try their hand at things perhaps a little bit more than they're ready for.

BLOCK: Did you see the Berenstains changing the tone of their books over time?

Mr. GLASSMAN: Well, certainly. I mean, as commercial success led to them doing ever more books about the bears, I think the pressure to turn out more work led them to become a little bit more formulaic. They started looking for messages and morals to tell.

BLOCK: It's interesting that you mentioned these morality tales. We have a clip of the video version of the Berenstain book "The Berenstain Bears Learn About Strangers." Let's take a listen.

(Soundbite of "The Berenstain Bears Learn About Strangers")

Unidentified Actress #1: Well, how were things at the village green today?

Unidentified Actress #2: OK, I guess, but there were so many strangers.

Unidentified Actress #1: You know, what Papa told you about strangers was quite right. It's not a good idea to talk to strangers or accept presents or rides from them.

BLOCK: Peter Glassman, is that the kind of thing you're talking about there?

Mr. GLASSMAN: Yes. Books that are trying to teach a point inevitably become less entertaining and more of a lesson. The Berenstains in trying to fulfill an ever-growing clamor for their work, which was delightful, had--to satisfy that clamor, had to unfortunately sacrifice perhaps a little bit of their storytelling art.

BLOCK: I was interested to read that the Berenstains' first editor was Theodor Geisel, Dr. Seuss.

Mr. GLASSMAN: Absolutely. Dr. Seuss had been a cartoonist. He knew Stan and Jan, who were quite successful as cartoonists, and asked them to do a story. And so that's how "The Honey Hunt" came about.

BLOCK: One of the Berenstains, and I think it was Stan, at one point explained how they ended up with bears with a pretty simple explanation. He said, `We chose bears because they can stand up, they look good in clothes and they're fun to draw.'

Mr. GLASSMAN: I think that partially explains why there are so many bear books. (Laughs)

BLOCK: Peter Glassman, thanks very much.

Mr. GLASSMAN: Thank you so much.