Accessibility links
Singer Evokes Turbulent History of Cairo, Ill. Cairo is best known for its link to the Lewis and Clark Expedition and its role during the Civil War. But musician Stace England delves into the town's most recent history, including dark periods of lynches, race riots and economic depression. 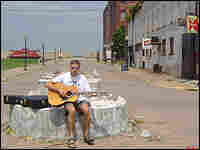 Musician Stace England at the intersection of 8th and Commerical streets, one of the most notorious locations in town. In November 1909, a black man was hanged from an arch there, allegedly for raping a white girl. Rachel Jones, NPR hide caption 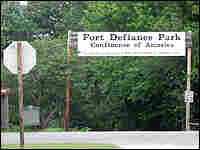 Fort Defiance Park marks the convergence of Mississippi and Ohio rivers. Lewis and Clark set up camp near hear in 1806. England believes the park could be developed into a venue for concerts and other activities. Rachel Jones, NPR hide caption

The saga of Cairo, Ill., includes a prominent link to the Lewis and Clark Expedition and a key role in the Western campaign of the Civil War. But the town at the southernmost tip of the state is also known for a sad history of racial strife. Stace England's new CD, Greetings from Cairo, Illinois, evokes the town's turbulent past with a haunting mix of barbershop, blues and backwoods rock 'n' roll.

England, 43, grew up on a Wabash River farm in central Illinois. Cairo, pronounced "Care-O," didn't became a creative inspiration for him until he started writing music and playing the guitar in the late 1980s. That's when he says he channeled a Cairo image and included it in one of his songs.

Growing up in a town torn by racial tensions, NPR's Rachel Jones learned about heartache, but also about survival and kindness. Jan. 21, 2006

Though England moved to Los Angeles and pursued a career as a health care consultant, he always knew he would come back to the Midwest. He eventually settled in Cobden, Ill. But there was still something about Cairo.

On the Sunday afternoon I met with England, he was standing at the corner of 8th and Commercial streets, in the heart of what was once Cairo's booming business district. He explained to me how the town's more recent history intrigued him.

"When I got back here in '93, I visited a couple times, and then I saw Preston Ewing's magnificent book, Let My People Go, of photographs during the civil rights period here," England says. "I was just blown away. It was like one of those life moments, it was just a gut punch that takes the wind out of you."

That gut punch made England spend five years researching Cairo's past, talking to town elders and historians, and sifting through the Civil War collections at the library. The intersection where we met is one of the most notorious locations in town. In November 1909, a black man named Will James was hanged from an arch at 8th and Commercial, allegedly for raping a white girl.

England learned that on the same night, a white man named Henry Salzner was also lynched for killing his wife. One of the album's most haunting refrains was born.

England sings, "We're an equal opportunity lynch mob, hanging strange fruit on the vine. We marched to God's drumming, when they had it coming, justice should be colorblind."

In the 1930s, the Great Depression hit Cairo hard. The town's population and fortunes began to dwindle. By the '60s, the old scars had hardened, and Cairo's racial divide was starkly drawn. In 1967, the suspicious death of a 19-year-old black soldier in police custody led to a riot, and the National Guard was called in. Black residents protested harsh segregation and vigilante violence by waging one of the longest Civil Rights boycotts in America's history. Residents were helped by what local whites called "outside agitators," including the Rev. Jesse Jackson. England pays his edgiest tribute to Cairo's turbulent history in "Jesse's Coming to Town," a '70s techno-soul inspired tune: "Lord knows he's the unifier, we're ready to believe and obey, the power of the people in the United Front surely gonna carry the day. Jesse's coming to town."

Eventually, Cairo's population shrank to its current level of about 3,000. What's left is an eerie shell that looks like a ghost town or a Hollywood movie set. But England believes Cairo can come back, and he says so in his album's final song, "Can't We All Just Get Along."

England believes the people of Cairo have lived America's racial and class dramas for decades, and they've paid a heavy price for it. They've learned the hard way what happens when you ignore the wounds that fester just below the surface.