Kate Bush's new CD, Aerial is her first recording in more than a decade. Bush was best known for her 1977 smash hit song, "Wuthering Heights." Christian Bordal offers a review of Aerial. 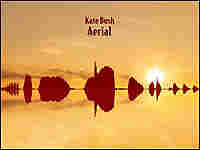 Kate Bush's new album is her first in a decade. hide caption

Ms. KATE BUSH: (Singing) I love the way that you spin the ball. Sweet. Roll that ball...

Kate Bush was still a teen-ager when she unexpectedly burst onto the pop music scene almost 30 years ago with the smash-hit song "Wuthering Heights." Now she's put out her eighth CD. It's called "Aerial." It's her first new release in a dozen years. Music critic Christian Bordal has this review.

Ms. BUSH: (Singing) I found a book on how to be invisible.

When she first arrived at the age of 19, famously discovered by David Gilmore of Pink Floyd, Kate Bush was like a beautiful alien, a wild, untamed musical creature. With her literate lyrics and her high-pitched wailing voice, I don't think even her label, EMI, expected her to be anything more than a fringe artist. But Bush's very first single, "Wuthering Heights," went straight to number one on the British charts and stayed there for four weeks. She never looked back.

BORDAL: In the last 20 years Kate Bush has grown up. Her music has become more sophisticated. It's taken on a kind of Peter Gabriel gloss of perfection. And just like Gabriel, who she's worked with on a number of occasions, she famously spends more and more time in the studio on each record getting exactly what she wants.

Ms. BUSH: (Singing) Ooh, who is that girl? Joanni, Joanni wears a golden cross. And she looks so beautiful in her armour.

BORDAL: Of course, there's a tension between the wild, untamed Kate Bush of her early career and the craftsman she's become. At first listen, her latest record, "Aerial," has a muted, suppressed quality. There's a high gloss that feels like it's laying everything down, like a TV actor with not a hair out of place. And being a fan of the early Kate, I admit to at least a temporary frustration with this painstakingly crafted music.

Ms. BUSH: (Singing) And her completed infatuation by your calculation. Why...

BORDAL: But if "Aerial" is at first blush frustrating to old fans, the album rewards subsequent and more careful listening. If you're willing to really sit down and pay attention, all kinds of subtle beauty and inspiration will begin to unfold for you. One of my favorite songs on the record uses the mathematical symbol "Pi" as its title. In it, Bush describes a man who loves numbers, and she actually sings about a hundred decimal places into the famous fraction.

BORDAL: It's been 12 years since Kate Bush's last release, but the famously reclusive artist certainly hasn't spent all that time working on this new record. She's become a mother. In fact, the CD contains a rather cloying love song to her son, Bertie. And she's been, by her own description, living a normal life, and gentle, poetic insight into normal life is mostly what fills up the two CDs of this latest Kate Bush album.

Ms. BUSH: (Singing) Somewhere in between the ...(unintelligible) wait and wait.

CHADWICK: I'm Alex Chadwick. Stay with us on DAY TO DAY from NPR News.