Accessibility links
Paying Real Money to Win Online Games Sometime today, millions of people will check out of this world and into the world of online games. And many of them will think nothing of pulling out real credit cards to buy virtual gold, swords — even humans. 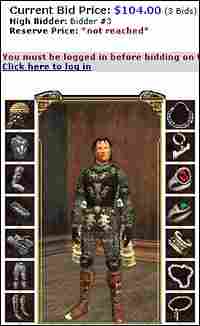 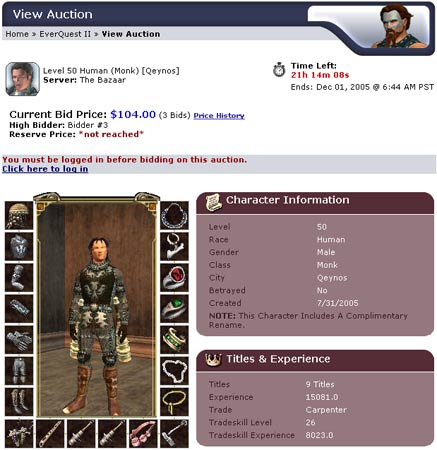 An online auction for a virtual human character in the online game EverQuest II. 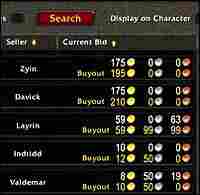 An auction for items within the World of Warcraft game shows prices, in virtual gold pieces. Blizzard Entertainment hide caption 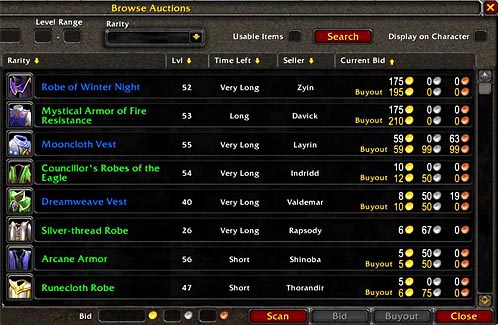 An auction for items within the World of Warcraft game shows prices, in virtual gold pieces. 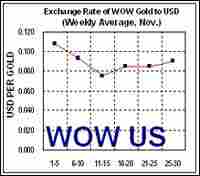 The exchange rate of World of Warcraft virtual gold is averaging just below 10 cents per piece, according to the WOW Gold Price Research Web site. WOW Gold Prices hide caption 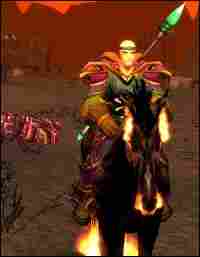 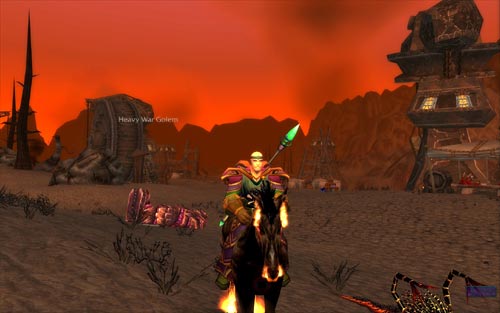 Sometime today, millions of people -- most of them in the U.S. and the Far East -- will check out of this world and into what economist Edward Castronova calls a "synthetic world." They are checking into online games including EverQuest, Ultima Online and Star Wars Galaxies.

Robert Holt is a manager for NPR.org and an avid player of online games. He reviews games for NPR's All Things Considered. His first online gaming experience was in 1986, playing the strategy game Diplomacy on a computer bulletin board system. Holt explains some of the terminology and methods of paying to play -- and why he thinks it ruins the gaming experience:

In massively multi-player online role playing games (MMORPGs), it can take months of playing time to become a powerful character. Characters are measured by their "level" -- it's simply a number. Level 20 characters are more powerful than level 17 characters. It took me 15 days of elapsed playing time to get Galt, my World of Warcraft character, up to level 60 -- the highest level in the game. Now, I enjoyed that process, but some people want to be powerful right away -- without all the work.

It's possible to pay someone or a service to "power-level" your character for you -- in other words, "level it up" and play it for you until it's all-powerful. This involves giving the power-leveling service your username and password so that their employees can enter the game as you. Because most MMORPGs require a monthly subscription fee, this gives the power-leveling service access to your credit card information, unless you use a pre-paid game card. Each username and password -- known as an account -- usually has the ability to have multiple characters. So the service could delete characters, and you would have no recourse.

It's also possible to buy a pre-leveled character -- but what you're actually buying is an account, and each account must pay a monthly subscription fee. This usually only works for players just starting out, or with a lot of disposable income.

As you can see, this is a potentially dangerous practice.

In MMORPGs, "gold farming" is the act of performing tasks for the sole purpose of raising virtual money. There are two main reasons for doing this. The first reason: you're saving up money to buy something for your character -- or a friend's character-- that will improve that character's abilities in the world. Some examples of improved abilities -- your character travels faster, or has a weapon or piece of equipment that gives it an advantage over other players in player-versus-player (PvP) fights. The second reason to farm is so that you can sell the items outside of the game for real-world money.

From reports on the Internet, there are individuals and groups in Asia and Eastern Europe where people are paid a very low wage to play characters for long hours -- with the sole purpose of making virtual money that will later be converted into real money.

The farmer's character will try to make the most amount of money during his shift -- some are rumored to have quotas. In order to do this, the characters perform certain tasks that are guaranteed to make money -- killing monsters that drop large amounts of money, and going on quests that yield valuable in-game items like weapons and armor.

The farmers then sell their items through online sites. An interested buyer visits these sites and selects the game he's playing. The buyer browses what's available, selects what he wants, and enters his credit card number. At this point, the player must trust the farmer and wait for him to complete the transaction in-game -- the farmer must enter the game, and either arrange a meeting, or use the in-game postal service to send the items. Because it is against the end-user license agreement of most MMORPGs, there's no guarantee or any recourse if the farmer doesn't deliver the promised goods. I've heard that many people have been scammed in this way.

Sony, the creator of the EverQuest series of MMORPGs, has embraced this practice by creating Station Exchange. It allows users of specific EverQuest II realms to exchange goods and even power-leveled characters for real money, and Sony guarantees the transaction. A "realm" or "shard" in MMORPG parlance is a copy of the game world. Currently, Sony only supports Station Exchange on two realms out of the 25+ realms available.

Is It So Wrong?

In my opinion, there are many reasons why you shouldn't buy items or power-leveled characters.

• It destroys the economy of the game. In the game, unlike in the real world, all users start on a level playing field. I like that. There should be no advantage to you in the game if you're rich in real life. This may be idealistic, but I play games to get away from things like this. It also causes items that are being auctioned to become over-valued because large amounts of gold are easily purchased. This puts the purchase of powerful items out of the reach of the player that doesn't purchase gold using real money.

• Sure, it's great to be all-powerful, or "uber" in game parlance. But at what cost? I consider it cheating to buy your way in to an uber character. In order to be truly "uber," you need to earn it. Besides, it takes a lot of skill to use a high-level character's abilities to their fullest, so an inexperienced player that has purchased a high-level character will very often lose a battle or die because they don't have the experience of all that playing time.

• For me, the point of playing these games is not to win -- it's to be immersed in the worlds, and to interact with fellow players. You miss out on truly experiencing the world if you don't earn your items and character abilities.

I think it's OK to receive items or money in-game from friends, however. This usually happens through guilds -- player-created alliances. It's customary in guilds for the higher-level characters to help lower-level characters.

It's tempting to buy gold, however. I have a lower-level character in World of Warcraft that is about to reach level 40 -- which required four days of playing time to reach--and I'll be able to purchase a horse that will let me move 60 percent faster in the world. The trouble is, it costs around 90 gold pieces total to train and buy it. My character has only three gold now. It will take me MANY hours to save that amount of gold... or I could pay the $30 and have it now. Is $30 worth hours of my time? Some would say yes. But remember this -- if you do it in most MMORPGs, you're violating the end-user license agreement -- and if the game operators find out, you could be banned for life from the game. That would be bad... I'd miss it too much. 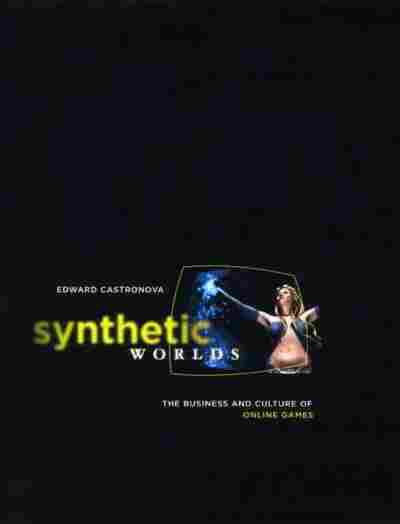 The Business And Culture Of Online Games