Said Sen. Charles Schumer of an abortion memo by Samuel Alito: ''These latest revelations cast serious doubt on whether Judge Alito can be at all objective on the right to privacy and a woman's right to choose." He met with Alito earlier this month. Win McNamee, Getty Images hide caption 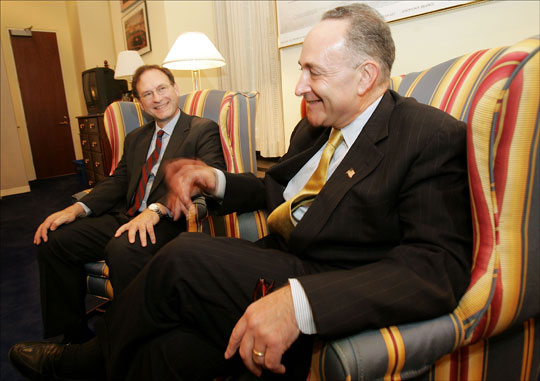 Said Sen. Charles Schumer of an abortion memo by Samuel Alito: ''These latest revelations cast serious doubt on whether Judge Alito can be at all objective on the right to privacy and a woman's right to choose." He met with Alito earlier this month.

While working as a Justice Department lawyer in 1985, Samuel Alito wrote in a memo that the government "should make clear that we disagree with Roe v. Wade," the landmark 1973 Supreme Court decision that legalized abortion.

The memo, in which Alito offered a strategy for reducing Roe's effects, was part of a large collection of documents released by the National Archives on Wednesday in preparation for the upcoming confirmation hearings for the Supreme Court nominee, which are scheduled to begin in January.

The Senate Judiciary Committee also released a 60-page questionnaire filled out by Alito, in which he advocates a "strong and lawful remedy" when constitutional violations have occurred, and the committee's chairman made public a letter listing questions likely to arise during the confirmation hearing.

The 20-year-old memo, which discussed whether the government should take a position on a pending abortion rights case before the court, is the second document in which Alito appears to show his strong opposition to Roe. Earlier this month, a personal qualifications statement from Alito -- written when he applied for the same Justice Department job in which he later drafted the memo –- was released by the Reagan Presidential Library. In the written statement, Alito said that he was "particularly proud of my contributions in recent cases in which the government has argued in the Supreme Court … that the Constitution does not protect a right to an abortion."

The newest document is sure to fuel opposition among abortion rights advocates and pro-choice politicians, such as Sen. Charles Schumer (D-NY), who on Wednesday called Alito's abortion memo "stunning."

For their part, Alito's supporters have said that both documents merely show that Alito was simply doing his job -- as a lawyer working for his client, a pro-life administration. In meetings with senators, Alito has said he respects court precedents such as Roe.

And in the new Judiciary Committee questionnaire, he states that he hasn't told anyone how he would rule on the matter.