Accessibility links
Dane Cook: A Stand-Up Comic on the Rise Dane Cook is selling out big venues. His CD is a smash. He's a Saturday Night Live host. Not bad for a comic who credits the Web with helping him build a loyal fan base.

Listen
Dane Cook: A Stand-Up Comic on the Rise 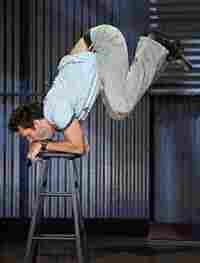 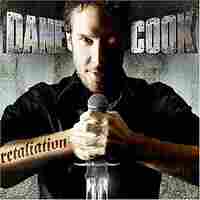 The comic's onstage bits, brought to life on Comedy Central:

The recent Comedy Festival in Las Vegas drew the "A-list" of funny folks -- Jon Stewart, Dave Chappelle and Jerry Seinfeld, just to name a few. But standing out in that crowd was Dane Cook.

Cook isn't a household name yet, but he's been selling out large venues like Madison Square Garden, and his first CD, Retaliation reached the top five on the Billboard charts. That hasn't happened since 1978 when Steve Martin hit the charts with A Wild and Crazy Guy.

Six years ago, Cook was barely known outside of his loyal following, mostly college kids and regulars at comedy clubs across America. That began to change after a half-hour special on the Comedy Central network in 2001. It proved to be so popular the network has replayed it more than 50 times.

'Struck by a Vehicle'

Still, Cook largely credits his Web site for building his loyal fan base, one fan at a time. He's something of an Internet pioneer in the comedy field. Cook updates the content on his site constantly, and put bits from his stage act on Napster. And he answered every e-mail -- even when they started pouring in by the thousands. His grass-roots, high-tech marketing campaign was new to the industry, and it paid off.

The other draw is Cook's crazed physicality onstage. He pulls his clothes off to make a point, and often goes into wild, cartoon-like contortions.

And Cook's profile is about to get much bigger -- he's slated to host Saturday Night Live on December 3.

Video, Audio and More at DaneCook.com