Accessibility links
Frank Lloyd Wright School in Turmoil Forty-six years after Frank Lloyd Wright's death, the architecture school and the fellowship that bear his name are fighting for their survival -- in part because of their unconventional nature. Ted Robbins visits Taliesin West -- Wright's home, school and studio in Scottsdale, Ariz.

Forty-six years after Frank Lloyd Wright's death, the architecture school and the fellowship that bear his name are fighting for their survival -- in part because of their unconventional nature. 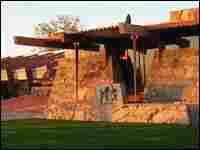 In the last year-and-a-half, two CEO's have resigned, along with the Frank Lloyd Wright School of Architecture's dean and a number of faculty members. The turmoil came after a report became public saying that Taliesin West and a sister campus in Wisconsin needed $100 million for future development. The need for restoration work in both facilities has now more than doubled that estimate.

Today, most of Taliesin's income comes from tours. The school has never made money -- it charges a modest $13,000-per-year tuition, which includes room and board. But Victor Sidy, a former apprentice who is the school's new dean, is hopeful. He wants to increase enrollment from the current dozen to 30, and to use Taliesin as a laboratory -- not just a museum.

"This is an amazing challenge," Sidy says, "how can we take a wonderful set of buildings and breathe that type of life, intellectual rigor, creativity into them and come out with cutting-edge ideas?" 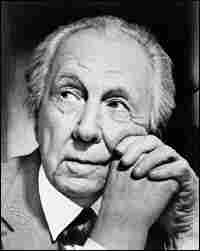 Frank Lloyd Wright set up the school and the Taliesin Fellowship, then populated them with his disciples. Some critics say they are frozen in Wright's time. Library of Congress hide caption