Six plates, seven water glasses, four cups and saucers, a platter and a tureen with a broken handle: These were the only possessions that Weekend Edition Saturday senior editor Gwendolyn Thompkins could salvage from her house in New Orleans. She sent back these impressions. 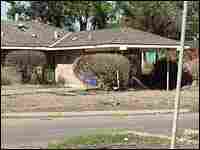 In the 1950s, Pontchartrain Park made news as "one of the biggest, most luxurious Negro developments ever undertaken in the South."

It was the 1950s and we were proud Negroes, breaking new ground near the lake. When residents Audrey and Meldon Woods moved to Pontchartrain Park in 1958, it was so quiet and tucked away that her father gave them a shotgun, just in case. The Woodses were among the first to settle an elegantly named street in Pontchartrain Park called Providence Place.

Hear Music from This Story

'Do You Believe in Love at Sight?'

The Wild Magnolias from Life is a Carnival (Blue Note Records)

Aaron Neville from Tell It Like it Is and Other Golden Classics (Collectible Records Corp.)

'I'll Take You There'

While New Orleans has always been an integrated city, Pontchartrain Park was simultaneously a step forward and a step back. It was a product of segregationist thinking. But The Park, as we call it, also gave black New Orleanians all the benefits of suburbia within city limits.

There is a vast and stately park in the neighborhood with amenities such as a handsome golf course and a Little League stadium. Across the street is Southern University in New Orleans, the state school established for black college kids in town. Surrounding the park are more than 1,000 modest homes.

Somebody told the Times-Picayune recently that growing up in Pontchartrain Park was like growing up in Leave It to Beaver Land. I remember complaining as a teenager in the 1980s that nothing ever happened here.

But there was a lot going on that I didn't see at the time. More than 90 percent of the people here owned their own homes. Nearly every kid I knew went to college -- the worst student in my class ended up playing with Lionel Hampton. One resident, Ernest Morial, went on to become the first black mayor of New Orleans.

Pontchartrain Park today is a thousand variations on a theme of catastrophe -- from my block, clear to the other side of the neighborhood. Outside my house, at the top of what used to be my sister's window, I found a dead fish stuck to the blind.

Many Pontchartrain Park residents are people in their 70s. Some are holding out for some good news from the insurance companies, hoping to be able to rebuild. Others aren't sure they'll return home.

Hear Part One of This Report