Accessibility links
Vaccine Production May Fail in Flu Pandemic The current method of vaccine production, which requires the incubation of flu virus in chicken eggs, may not be up to the task of protecting people from a new strain of deadly flu. 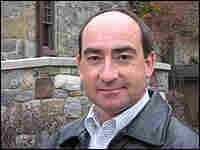 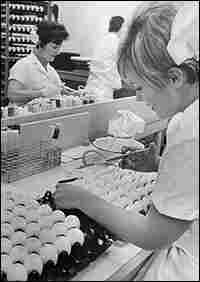 A lab assistant inoculates fertile eggs with Hong Kong influenza virus in 1968. The process of injecting eggs with viruses has been automated, but the principle behind flu vaccine production remains the same. Nacho Doce/Reuters/Corbis hide caption

The flu vaccine that millions of Americans get each year actually starts coming to life in a hen house.

When production is in full swing at the only major flu vaccine manufacturing facility in the U.S., Sanofi Pasteur, trucks carry hundreds of thousands of specially fertilized eggs across the bridges of Swiftwater Creek, Pa., every day. Hens and roosters at Cornell University produce the eggs, which act as incubators for the flu virus injected into them at Sanofi Pasteur.

The vaccines eventually produced through this method are good at protecting people from the routine influenza that sweeps the globe every winter. But the current technology may not be up to the task of protecting people from a brand new strain of deadly flu -- a much-feared pandemic. A look at the strengths -- and weaknesses -- of this decades-old technology.