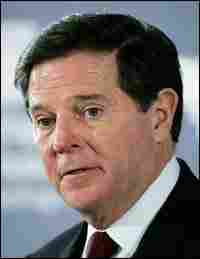 However, Judge Pat Priest threw out charges of conspiracy to violate the Texas election code.

This means DeLay will go to trial next year. He is accused of illegally funneling nearly $200,000 to GOP candidates during the 2002 elections for the Texas legislature.

The judge's ruling dashes DeLay's hopes for an early return to his post as House majority leader.