Accessibility links
Cuts Worrying to Editorial Cartoonists Major U.S. newspapers continue to cut staff to offset disappointing revenue. But recent layoffs and buyouts at two newspapers owned by the Tribune Company prompted editorial cartoonists to protest. The cartoonists fear the cost-cutting measures may signal the end of an era for their profession.

Major U.S. newspapers continue to cut staff to offset disappointing revenue. But recent layoffs and buyouts at two newspapers owned by the Tribune Company prompted editorial cartoonists to protest. The cartoonists fear the cost-cutting measures may signal the end of an era for their profession. 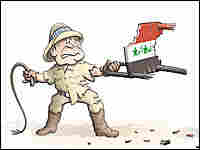 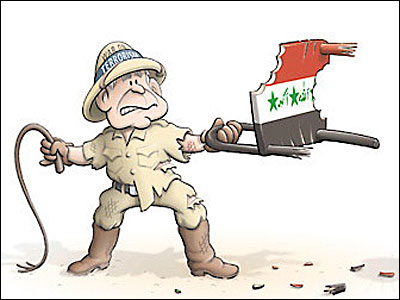 The work of Clay Bennett, editorial cartooonist for The Christian Science Monitor and president of the Association of American Editorial Cartoonists.

Around the country, newspapers are cutting staff to make up for disappointing revenue, and recent layoffs and buyouts at two newspapers owned by the Tribune Company have prompted editorial cartoonists to protest. The cartoonists fear cost-cutting measures may spell the end of an era for their profession. NPR's Lynn Neary has the story.

Clay Bennett, editorial cartoonist for The Christian Science Monitor, knows full well that cartoonists are not the only print journalists affected by the current state of the newspaper business.

Mr. CLAY BENNETT (Editorial Cartoonist): We're all threatened. We're all endangered species in print journalism. It's just that the editorial cartoonist is more like the snail darter. It's the most endangered.

NEARY: So Bennett, who is also president of the Association of American Editorial Cartoonists, shot off a letter to the Tribune Company when cartoonist Michael Ramirez was one of 85 people laid off at the LA Times. Not long after that, Bennett learned the staff cartoonist at the Tribune-owned Baltimore Sun had accepted a buyout offer. Bennett is concerned that the newspapers plan to eliminate the position of staff cartoonist altogether. He says the number of staff positions on newspapers has already been cut in half over the last 25 years. Bennett believes many newspapers are getting rid of cartoonists not just for economic reasons but because they can be controversial and in these difficult economic times, Bennett says, newspapers fear controversy.

Mr. BENNETT: They rush to the mushy middle. The want to be everything to everybody. They don't want to lose even one reader. That may make sense to some accountant, but it doesn't make sense when it comes to creating a newspaper that people want to read.

NEARY: Chris Lamb is the author of "Drawn to Extremes: The Use and Abuse of Editorial Cartoons." Lamb says editorial cartoons are supposed to have a strong point of view.

Prof. LAMB: The best cartoons are like switchblades; they cut deeply and leave a scar like, you know, David Levin's cartoon of LBJ lifting his shirt to show a gall bladder scar in the shape of Vietnam. Our greatest contribution to civilization is we have the right to criticize the government, and no one takes that more seriously than the best editorial cartoonists.

NEARY: At the Chicago Tribune, the position of staff cartoonist has been vacant for five years. Editorial page editor Bruce Dold says the paper has not ruled hiring a new cartoonist, but whatever the paper does, Dold says, politics will have little to do with it.

Mr. BRUCE DOLD (Editorial Page Editor, Chicago Tribune): We have hard-hitting columnists and we take the heat when they write. I still run controversial cartoons from the ones that we buy. So I really don't think that concern about controversy has been weighing on this. I think this has been far more an economic issue.

NEARY: The problem for cartoonists, says Dold, is that newspapers don't need to rely on staff cartoonists because they can buy syndicated cartoons.

NEARY: Clay Bennett believes newspapers are making a big mistake. At a time when they want to increase circulation, he says, they are getting rid of a feature that not only attracts readers but also gives newspapers a distinctive local feel.

Mr. BENNETT: Why even have a newsroom? Just run stories out of New York and out of Chicago and out of LA. Just run columns that are written in Washington, DC, and just run cartoons that are drawn states away from you. That's not what makes a local newspaper great.

NEARY: Bennett says he's already talked to his own family about what might happen if he loses his job. He's thinking they might have to move to a small town in Mexico, an inexpensive town. Lynn Neary, NPR News, Washington.