Accessibility links
Q & A: An Examination of the Kyoto Protocol The Kyoto Protocol is an ambitious effort to reduce the manmade emissions believed responsible for global warming. Here we examine some of the stumbling blocks Kyoto has faced, as well as its successes.

Q & A: An Examination of the Kyoto Protocol

Q & A: An Examination of the Kyoto Protocol 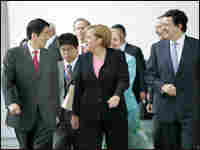 Leaders of industrialized nations are meeting in Germany this week, in part to discuss the Kyoto Protocol.

The protocol, coming into effect in 2008, is an ambitious effort to reduce the manmade emissions responsible for climate warming. But its impact has been less than many hoped, in part due to the absence of the United States from the pact.

Here, we outline the stumbling blocks Kyoto has faced, as well as its successes.

What is the goal of the Kyoto Protocol?

The pact's intention is to jumpstart global efforts to limit emissions of the "greenhouse gases" that warm the Earth. Carbon dioxide, which is a major product of burning fossil fuels like coal and oil, is the greenhouse gas people are most worried about.

How does the treaty attempt to curb greenhouse gases?

It requires developed countries that have ratified the treaty to reduce emissions, during the years between 2008 and 2012, by an average of 5.2 percent below 1990 levels. For some nations, this translates into a 15 percent reduction below projected 2008 emissions.

The protocol also creates a kind of "policy toolbox" for cutting emissions. For example, it encourages countries to set up markets for buying and selling emissions credits. The idea is that a company with low emissions could sell its "clean air" credits to a company with higher emission levels. A similar mechanism allows companies to earn carbon credits by funding projects like solar farms or tree plantations, which soak up carbon, in developing nations.

Who ratified the treaty?

More than 160 countries have signed on, including more than 30 industrialized countries. The United States — which produces about one-quarter of the world's greenhouse gases — initially signed the agreement, but later rejected it.

Nonetheless, because other large countries that together emit more than half of the world's carbon have signed the agreement, the deal had enough weight behind it to become official on Feb. 16, 2005.

What are the major problems with the treaty?

The United States hasn't become part of the agreement because it considers a problem the fact that several major developing nations, including India and China, are not required to reduce emissions under the agreement. China is expected to overtake the United States as the world's largest producer of greenhouse gases as early as this year.

Perhaps an even bigger problem with Kyoto, however, is that scientists say that even if it is successful, it would do relatively little to slow the pace of global warming.

What is happening this week in Germany?

One goal of the G-8 Summit is to determine how to involve the United States, China, India, and the rest of the developing world in the reduction of carbon emissions. Delegates are also beginning to prepare for a December 2007 Kyoto Protocol summit in Bali, where attention will focus on what should happen after 2012, when the current agreement expires. So far, there is no consensus on whether a new agreement should look like Kyoto, or take a different approach.

In a parallel but separate endeavor, President Bush will be promoting his administration's long-term climate change strategy at the meeting. President Bush seeks to unite 15 major industrial nations, including China and India, in an effort to reduce global emissions. The president says he wants to establish specific goals and commitments in a series of meetings before his term expires in January 2009.

Why has the United States refused to participate in Kyoto?

In general, the Bush administration says there's not enough bang for the buck. It says the pace and scale of cuts required by Kyoto would hurt the U.S. economy without providing significant environmental benefits. The White House also says more research is needed to understand the warming trend and how technology can be used to reverse or slow global warming. And it argues that, in order to attract the backing of industry, there should be a greater emphasis on economic incentives and more flexible, voluntary measures.

Australia is the only other industrialized country that is siding with the United States. Why has it rejected the treaty?

Mostly for reasons that are similar to those voiced by the Bush administration. Like the United States, it also wants to see major developing nations such as China and India play a greater role in addressing the warming problem.

Are participating countries on track to meet the protocol's targets?

Overall, no. The American and Australian rejections were a major blow to achieving the reductions. Meanwhile, in Europe, many experts are predicting that governments won't be able to reduce emissions as much as they had hoped. The European Union has been on track to meet its Kyoto targets, but it's not clear if that's due to Kyoto. For instance, Britain may be benefiting from a switch from coal-fired plants to gas that took place in the early 1990s, and Eastern European countries may be seeing an emissions drop because of industries that collapsed with the fall of the Soviet Union. A looming question is whether the European Union will continue to see a reduction in emissions, or, as some measures currently indicate, a rise.

How have other players — such as state governments and industry — reacted to the U.S. government's position?

Many in U.S. local governments have decided that some kind of international greenhouse gas limits are inevitable. So they want to make sure their local economies would remain competitive in a "carbon constrained" world. More than 150 U.S. mayors are pushing programs aimed at reducing emissions. And more than 400 U.S. cities locally support and adhere to Kyoto as of 2005.

At the state level, more than a dozen states have proposed various kinds of caps on emissions from power plants and automobiles, and are promising to promote cleaner energy sources. For instance, eight Northeastern states are developing an initiative setting state-level emissions caps and establishing a trading program. California also is a major state player. It has proposed reducing greenhouse emissions to 1990 levels by 2020, a 25 percent reduction below projected levels.

Many major energy companies — including the British-based oil giant BP and Australian mining leader Rio Tinto — are also moving to cut emissions, partly to be more competitive when regulation arrives.

Can Kyoto claim any successes?

Yes. The treaty has certainly put the issue on the map and provided a forum for some pretty frank discussions. It has laid the groundwork for very complicated diplomatic and economic relationships that are needed to curb climate change. It also created a European carbon credit trading market worth $30 billion after only two years.

A few decades ago, not many people would have predicted that there would be talk about paying countries to protect, or plant, forests in order to lock up carbon – or about harvesting methane, which is a very potent warming gas, from giant trash landfills. Those things are happening now. And it's likely that even if there is never a "child of Kyoto," a lot of the ideas it tested will find their way into policies of the future. As a lot of experts have said, Kyoto is a small but necessary first step.

Read Editorials from Around the Globe