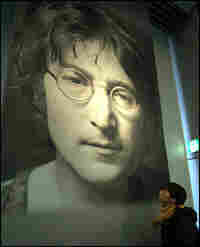 At the John Lennon Museum in Saitama, Japan, a girl looks at a portrait of Lennon after offering flowers to mark the 25th anniversary of his death. Reuters hide caption 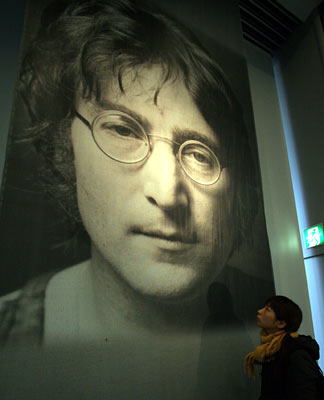 At the John Lennon Museum in Saitama, Japan, a girl looks at a portrait of Lennon after offering flowers to mark the 25th anniversary of his death.

Twenty-five years ago today, John Lennon was murdered outside his home in New York City. Reporter Jon Kalish covered this story for NPR that evening. He looks back now at that fateful night.

It was a Monday night, close to midnight, when the call from NPR's New York bureau came in. John Lennon had been shot and NPR wanted me to go immediately to Roosevelt Hospital, about a mile downtown from my Upper West Side apartment. I grabbed my cassette recorder and a microphone and rushed off to the hospital. The announcement of Lennon's death was made by the head of the hospital's emergency services department, Dr. Stephen Lynn.

Dr. STEPHEN LYNN (Roosevelt Hospital): John Lennon was brought to the emergency room this evening shortly before 11 PM. He was dead on arrival.

Dr. LYNN: Extensive resuscitative efforts were made, but in spite of transfusions and many procedures, he could not be resuscitated.

KALISH: Dr. Lynn told reporters he was fairly certain Lennon died almost immediately after being shot, the result of a massive loss of blood from hemorrhaging blood vessels in his chest. Reporters asked how Lennon's wife, Yoko Ono, was doing.

Dr. LYNN: I did tell his wife that he was dead, and she was most distraught at the time and found it quite hard to accept. She is no longer at the hospital.

KALISH: Fans gathered outside The Dakota, a grand, six-story brownstone apartment building Lennon lived in overlooking Central Park. Two police cars were stationed in the entranceway. It was obvious the people who felt compelled to come to The Dakota that night loved John Lennon.

KALISH: Let me just ask you, why did you decide to come out here?

Unidentified Woman #1: My husband is a musician. He's with the Joe Cocker Band. We're very close to John Lennon, and we heard this through friends.

KALISH: Can I ask you what your reaction was when you heard he was shot?

Unidentified Woman #2: I felt like part of my life, part of my whole growing up was missing. And I just--I didn't want to believe that it really happened.

Unidentified Man: I took it like a--as a personal loss. The man changed my life, you know, and I just had to come here to make sure it's true. I don't even know why I'm standing here. I--it's amazing. I just can't believe it. Why anyone would chose to shoot him to begin with--I mean, I--for what purpose? It's beyond me.

KALISH: At the police precinct, a few blocks uptown from The Dakota, the cops told us a young man claimed he was a lifelong fan of Lennon's was under arrest for the killing.

KALISH: As the world would later learn, for much of the day, the deranged 25-year-old hospital security guard had been hanging out at The Dakota where John Lennon autographed an album for him. Lennon had been in the recording studio that day, and was apparently holding a tape of his wife Yoko's song "Walking On Thin Ice" when Chapman shot him. Chief Detective Sullivan explained that although the limos sometimes pulled into The Dakota's driveway, on this night, it pulled up to the curb.

Chief Det. SULLIVAN: They got out of the car, out of the limousine and walked into the archway area of The Dakota. Mr. Chapman came up behind him and called to him, `Mr. Lennon,' and then, in a combat stance, he emptied the Charter Arms .38-caliber gun that he had with him and shot John Lennon.

KALISH: I remember that in the days following Lennon's murder, there was a palpable feeling in New York of wanting to do something about gun control. But as the months rolled by, those hopes began to diminish. For NPR News, I'm Jon Kalish in New York.

(Soundbite of "I'm Only Sleeping")

Mr. JOHN LENNON: (Singing) Please, don't wake me, no, don't shake me. Leave me where I am. I'm only sleeping.

BRAND: DAY TO DAY is a production of NPR news with contributions from slate.com. I'm Madeleine Brand.