Accessibility links
Diverse Marseille Spared in French Riots As France suffered weeks of riots last month, the colorful southern port of Marseille was spared. The city has one of France's highest concentrations of immigrants, but residents there do not live in segregated communities.

Though France suffered three weeks of widespread rioting last month, one city was spared: the colorful southern port of Marseille. The city has one of France's highest concentrations of immigrants, but residents do not live in segregated communities and have a stronger sense of allegiance to the city than to the nation.

Contrary to the rest of France, there are many non-white journalists in the media. The police force has many agents of North African origin. The ethnic neighborhoods are not isolated, but centrally located. The municipality also gives grants to associations that have some religious and ethnic affiliations. 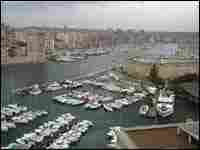