Accessibility links
Timeline: Tookie's Path to Death Row Follow a timeline of Stanley Tookie Williams' life from his birth to his execution by lethal injection at California's San Quentin State Prison on Dec. 13, 2005. 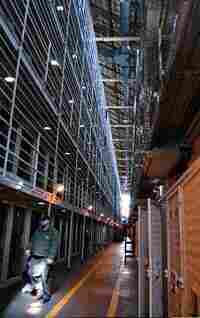 Follow a timeline of Stanley Tookie Williams' life from his birth to his Dec. 13, 2005, execution by lethal injection:

Dec. 29, 1953 -- Stanley Tookie Williams III is born in New Orleans Charity Hospital to a 17-year-old mother and a father who deserted the family before Williams' first birthday, according to his autobiography, Blue Rage, Black Redemption.

1959 -- Williams and his mother ride a Greyhound bus to California and settle in an apartment in South-Central Los Angeles. Williams recalls it as an affluent-looking neighborhood -- "a shiny red apple rotting away at the core."

1971 -- Williams joins the Crips street gang, already formed by high school friend Raymond Washington. In one version of the story, the original name of the gang was the Cribs, but drunken members of the gang routinely mispronounced the name as Crips, and it stuck. A rival gang member murders Washington in 1979.

1976 -- The U.S. Supreme Court allows capital punishment, suspended in 1967 when the court rules it to be "cruel and unusual punishment," to resume.

1977 -- The California Legislature reinstates the death penalty for the state. California currently has the nation's biggest death row population, with nearly 650 inmates. Eleven inmates have been executed in California since 1977.

Feb. 28, 1979 -- Prosecutors say Williams and three friends smoke PCP-laced cigarettes and drive to an industrial area east of Los Angeles in search of a place to rob. The four find a convenience market, and according to testimony at Williams' trial, Williams takes the lone employee, Albert Owens, 26, to a back room. Williams shoots out a security monitor and then kills Owens with two execution-style shots to the back. The robbery netted Williams and his associates about $120. Williams has consistently denied killing Owens.

March 11, 1979 -- Prosecutors say Williams, on his own, breaks into the office of the Brookhaven Motel in South-Central Los Angeles. Once inside, according to prosecutors, he kills three members of an immigrant family from Taiwan who owned and operated the motel: Yen-I Yang, 76, his wife Tsai-Shai Yang, 63, and their visiting daughter, Yee-Chen Lin, 43. As with the Owens killing two weeks before, there are today no surviving witnesses to the crime. But three of Williams' friends -- all with criminal histories and motivation to lie, Williams says -- testify that he confessed to the killings. A ballistics expert links a shotgun shell at the motel to Williams' gun. Williams has also steadfastly maintained his innocence in the Yang killings.

1981 -- Williams is tried and convicted in Los Angeles Superior Court of all four murders, plus two counts of robbery, and is sentenced to death. He arrives at San Quentin's death row on April 20.

1987 -- Williams is placed in solitary confinement for 6 1/2 years after committing a string of violent incidents behind bars, including assaults on guards and other inmates.

1988 -- The California Supreme Court affirms Williams' death sentence, and he files his first federal appeal to the U.S. District Court.

1996 -- Williams, with co-author Barbara Cottman Becnel, publishes the first of a series of anti-gang books aimed at children, Gangs and Wanting to Belong.

2001 -- Williams publishes a memoir of his years behind bars on San Quentin's death row. He says the tone of the book is intended to warn kids away from following his life of crime. "To get a feel for what it's like to live in a prison cell, test yourself," Williams writes. "Spend ten hours -- nonstop and alone -- in your bathroom." Williams is nominated for the Nobel Peace Prize for the first time by Mario Fehr, a member of the Swiss Parliament. He has been nominated for the prestigious award a total of six times.

Oct. 11, 2005 -- The U.S. Supreme Court denies Williams' petition for writ of certiorari, which asked the high court to review the lower court rulings in his case.

December 2005 -- The California Supreme Court rejects a request to reopen Williams' case because of allegations that shoddy forensics connects him to at least three of the shotgun murders.

Dec. 8, 2005 -- California Gov. Arnold Schwarzenegger, who reportedly met with Williams in the 1970s while working out in Venice Beach, holds a clemency hearing to help decide whether Williams' sentence should be commuted to life in prison. In a behind-closed-doors meeting, Williams defenders and prosecutors each have 30 minutes to plead their case to the governor. The last California governor to grant clemency was Ronald Regan in 1967, who spared the life of a mentally ill killer. After the meeting, Schwarzenegger gives no indication which way he will decide.

Dec. 12, 2005 -- Gov. Schwarzenegger denies Williams bid for clemency. In a written statement, he says: "The facts do not justify overturning the jury's verdict or the decisions of the courts in this case."