Accessibility links
Nod to Dad Puts Gilmore in Line for a Grammy Texas troubadour Jimmie Dale Gilmore's Come On Back is a musical tribute to his father, who was a talented amateur guitarist. Gilmore tells Debbie Elliott about a CD that has been nominated for a Grammy.

Listen
Nod to Dad Puts Gilmore in Line for a Grammy

Texas troubadour Jimmie Dale Gilmore's Come On Back is a musical tribute to his father, who was a talented amateur guitarist. Gilmore tells Debbie Elliott about a CD that has been nominated for a Grammy.

Three from 'Come On Back' 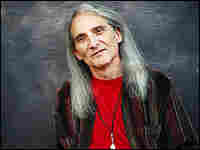 Jimmie Dale Gilmore could have been a big star on Nashville's Grand Ole Opry, but he preferred to stick with is Texas roots, first with the Flatlanders and later with a long solo career. His distinctive voice has been likened to a hinge that needs a shot of WD-40. It's a little bit Willie Nelson, a little bit Johnny Cash. His latest record, "Come On Back," harkens back to the days when country music was less glitz and more guts.

(Soundbite of song from "Standin' On the Corner")

Mr. JIMMIE DALE GILMORE: (Singing): Standing on the corner, I didn't mean no harm. Along came the police and took me by the arm.

ELLIOTT: The songs on "Come On Back" were all favorites of Gilmore's father, and the album is a tribute to his memory. Jimmie Dale Gilmore joins us now from member station WXPN in Philadelphia.

Mr. GILMORE: Hi, Debbie, how are you?

ELLIOTT: I'm good. How are you?

ELLIOTT: That song we just heard, "Standin' On the Corner," is an old Jimmie Rodgers tune. And you were actually named after him?

Mr. GILMORE: That's right, which is--that's the reason my name is spelled, J-I-M-M-I-E, which causes all kinds of confusion.

ELLIOTT: Music was obviously a big part of your family life growing up or I don't guess your parents would have named you after a country musician?

Mr. GILMORE: Right. Well, my dad was a guitar player. He wasn't really a pro. He was very, very good, but it wa--he never did it for a living. But he was just so much in love with music and, particularly, just, you know, the old country radio music, that it was a constant feature of my life growing up.

ELLIOTT: Is there a song on your new album that he used to play all the time?

Mr. GILMORE: Oh, there's several of them. That--"Walking the Floor Over You," that--the Ernest Tubb song, was something that my dad played a lot.

Mr. GILMORE: Of course, now I do have to say that the way we recorded this--you know, we didn't copy the old versions of these songs at all. We did--these are completely our versions.

(Soundbite from "Walking the Floor Over You")

Mr. GILMORE: I know that my dad would have loved that even though it wasn't--even though we didn't play it exactly the same as the--as the old way.

ELLIOTT: What did he do to make money...

Mr. GILMORE: ...came back from the--from World War II, he actually started college the same year that I started the first grade, and he became a bacteriologist. But his college job was at the creamery at Texas Tech in Lubbock. And he ended up staying there and becoming the director of it, the superintendent and did that for just about his whole life.

ELLIOTT: Where did your dad serve in the war?

Mr. GILMORE: He was in India, strangely enough. He was in what was at that time the Army Air Corps, and he was a firefighter. And he was stationed in India. And as a matter of fact, I--he got sent over there just after my mom got pregnant with me, and he--my dad didn't come home until I was over a year old. I always felt some kind of a connection with India because of that, I think.

ELLIOTT: Is that reflected in any of your music?

Mr. GILMORE: I don't think in the music, except in the sense that later on it affected my philosophical outlook.

Mr. GILMORE: Well, that gets into such a long conversation that's...

ELLIOTT: You lived in a commune, didn't I read?

Mr. GILMORE: No. No, it wasn't a commune. It was--I just lived in a big spiritual community. I was studying oriental philosophy and meditation. It was sort of in a way like a church group, you know, a bunch of people of like mind living in a community and participating in lots of activities together.

(Soundbite from an unidentified song)

Mr. GILMORE: (Singing) Now you're lookin' at a man that's getting kind of mad. I've had a lot of luck, but it's all been bad. No matter how I struggle and strive, I'll never get out of this world alive.

ELLIOTT: Who were your dad's favorite musicians that you were listening to growing up?

Mr. GILMORE: I think probably Hank Williams might have been the very favorite. I'm not sure, though, there were so many. There was Marty Robbins, he really loved. Ernest Tubb. A lot of the people that much later on I found out--you know, I didn't really know about Jimmie Rodgers when I was young. It was later on when I kind of started studying music that I found out that he had influenced so many of the people that were my dad's favorites. And then I found out later on, of course, that Jimmie Rodgers himself was deeply influenced by the blues.

ELLIOTT: Is there a song on this new album that shows us what you're talking about?

Mr. GILMORE: I think maybe just to illustrate that particular point there's one song on there that's a Carter Family song that I learned from a Flatt and Scruggs record. And it's called "Jimmie Brown the Newsboy." And it's one of those ones that's, you know--it's definitely in the border land between folk and country.

(Soundbite from "Jimmie Brown the Newsboy")

Mr. GILMORE: (Singing) I sell the morning paper, sir. My name is Jimmie Brown. Everybody knows that I'm the news boy of the town. You can hear me yellin' Morning Star runnin' along the street. I've got no hat upon my head, no shoes upon my feet.

ELLIOTT: Why did you want this song on the album?

Mr. GILMORE: It was the first song that I learned how to play--anything besides just rhythm on the guitar, and my dad was a good lead player. And the beautiful memory I have of that is the first time I played that song for my dad. It had been a favorite from when he was young. And it was the first time he complimented me on my guitar playing.

ELLIOTT: A lot of teen-agers don't necessarily get along with their parents. Was that a way for you guys to come together without having to deal with all that other stuff when you were playing music?

Mr. GILMORE: We didn't entirely escape from all that other stuff. I mean, we had very extreme differences of opinion on--particularly on politics. But music was always a place where we always had a common ground there.

ELLIOTT: One of the hardest moments I read from your liner notes on this album was after your father was diagnosed with Lou Gehrig's disease and he started to lose muscle control. Can you tell us that story?

Mr. GILMORE: Yeah. Well, it was one of the most touching times for me in making this whole record--was the music was just fun and it brought my dad back to mind. But when I started writing about my dad, it was really--I shouldn't say difficult. It was just very deeply touching to me, and I guess difficult might be the right word for it at a certain point when I started telling the story about the day that my mom called from Lubbock. I was down in Austin where I live now. She called and said, `He's lost control of his hand--he couldn't move his hands anymore. And then it was--just there was, you know--there was kind of a pause and she said, `He can't play the guitar anymore.' I have, you know, just a whole lifetime of memories of my dad sitting there. There's a little handful of songs that he played over and over, you know, that he knew how to play well. And nearly every day, I think, my dad sat and played his guitar--something. He just loved it so much.

ELLIOTT: The last song on your CD is the spiritual, "Peace In the Valley," which came to have special meaning to your father, Brian Gilmore.

Mr. GILMORE: My dad was a very spiritual person, but he--he's not affiliated with a church. You know, he didn't--organized religion wasn't his thing at all. And his whole life, you know, I never would have associated any of that kind of music with him. But then, very near the end of his life, my daughter, Elise(ph), his oldest granddaughter, one day she just asked him, `Granddaddy, what's your favorite song?' And she said he kind of--she thought he would immediately say, you know, just some old honky-tonk song, some sort of--but she said he just--he got a real far away look in his eyes and said, `Let me think about it a while.' And then later, I think, that same day, he said, `You know, I think my favorite song now is probably "Peace In the Valley."

Mr. GILMORE: (Singing) Well, the bear will be gentle and the wolf will be tame and the lion will lay down by the lamb, and the beast from the wild will be led by a little child. I'll be changed from this creature that I am.

Mr. GILMORE: My only regret is that my dad didn't get to hear this record. It was really my daughter, Elise, after my dad was gone one day just kind of said, `You know, someday you should do some of those songs that he loved so much.' And I knew immediately that I had to do it.

ELLIOTT: Jimmie Dale Gilmore's new record is "Come On Back," a tribute to the memory of his father, Brian Gilmore. Thanks for being with us.

Mr. GILMORE: Thank you, Debbie. It's my pleasure.