Accessibility links
The Myths and Men Behind 'King Kong' Merian Cooper and Ernest Schoedsack were anthropologists who followed ancient cultures with their cameras. Their dramatic experiences as documentary filmmakers informed their mythical, fictional masterpiece about a lost world and its secret creature, King Kong.

Listen
The Myths and Men Behind 'King Kong'

Merian Cooper and Ernest Schoedsack were anthropologists who followed ancient cultures with their cameras. Their dramatic experiences as documentary filmmakers informed their mythical, fictional masterpiece about a lost world and its secret creature, King Kong. 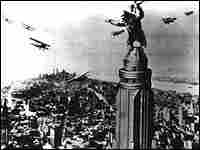 The curtains will part and he will appear again, Kong. Peter Jackson's remake of "King Kong" opens in theaters across the country this Wednesday. Even before seeing the movie, most potential viewers know what it's about. The story has been filmed twice, in 1933 and 1976, but Howie Movshovitz of Colorado Public Radio reports that interest in a huge ape discovered on a remote island may be older and deeper than we think.

Mr. ROBERT ARMSTRONG: (As Carl Denham) Ladies and gentlemen, I'm here tonight to tell you a very strange story, a story that so strange that no one will believe it.

When the original "King Kong" opened in 1933, it created an immediate sensation. There are accounts of viewers paying their 25 cents and watching the film over and over at continuous showings.

Mr. ARMSTRONG: (As Carl Denham) Ladies and gentlemen, look at Kong, the eighth wonder of the world.

MOVSHOVITZ: Obviously, the story had a great future ahead of it, but "King Kong" also had a past that might go all the way back to the world of Charles Darwin. Nearly a century before the movie came out, Darwin wrote that life developed slowly over hundreds of millions of years. A popular notion emerged that maybe, just maybe, some of these ancient beings still walked the dark corners of the Earth. Kirt Johnson's a paleobotanist and chief curator at the Denver Museum of Nature and Science. He says this romantic notion persisted well into the 20th century as Europeans and Americans set off for Africa, South America and Asia.

Dr. KIRT JOHNSON (Paleobotanist; Chief Curator, Denver Museum of Nature and Science): There was a lot of sort of unknown corners, and people were very fascinated about what was in those corners. At the same time, paleontology was coming to the fore in the sense that big dinosaurs were being mounted for public display for the first time. So 1905 sees the first Brontosaurus mounted in New York and then one in New Haven in Connecticut. And Andrew Carnegie says, `Get one for the Carnegie,' and they launched an exhibition out to Wyoming and in 1908, a big dinosaur is mounted in Pittsburgh. So a lot of popular culture is hinged on the discoveries of explorers and paleontologists, and it was pretty easy to imagine that if you don't know what you're going to find, you could find anything.

Mr. BRUCE CABOT: (As Jack Driscoll) What do you call this thing?

Mr. ARMSTRONG: (As Carl Denham) Why something from the dinosaur family.

Mr. ARMSTRONG: (As Carl Denham) Yes, Jack, a prehistoric beast. Say, just look at the length of that brute. If I could only bring back one of these alive.

MOVSHOVITZ: By the early 20th century, zoos were filling up with exotic creatures brought back by real-life adventurers, and cities were swelling with new inhabitants. Gregg Mitman, a professor of the history of science at the University of Wisconsin-Madison and the author of a book about animals in film, says some people, Teddy Roosevelt among them, began to worry that people were becoming too civilized.

Professor GREGG MITMAN (University of Wisconsin-Madison): And there was a lot of concern among Roosevelt and other of his patrician class that this rise of modern urban civilization was removing us--was removing him and others from nature. And it was really by going out and hunting in nature--through either the camera or the gun--in which the trappings of civilization could be shed, their own character would be laid bare and a more true, authentic self could be found, a much more primitive self, which they saw as masked by all the artificialities of modern civilization.

MOVSHOVITZ: Into this civilized world strode Merian C. Cooper, who had become the producer of the 1933 "King Kong." By all accounts, he was a real character. After being kicked out of the Naval Academy, Cooper flew bombers in World War I and was shot down. In 1920, he flew 70 missions for Poland against the invading troops of the Soviet Union and was shot down again. In Poland, Cooper met another adventurer, Ernst B. Schoedsack. He was a was a cinematographer, and together in 1924, they rode horses east from Turkey into Persia, where they filmed the nomadic Bakhtiari tribe, crossing frigid mountains and swollen rivers with their sheep. They called the film "Grass," and it's now considered a classic. A new documentary made by Turner Classics includes decades-old interviews with the two talking about that adventure.

Mr. ERNEST B. SCHOEDSACK (Filmmaker): We goddamn near froze to death in the snow. And Merian and I said, `We'll probably die up here, but let's make the goddamn picture,' and we did.

Mr. MERIAN C. COOPER (Filmmaker): There's so much I had to leave out of that thing. We didn't have the film. I wanted to go out and do the close-ups of bloody feet in the snow. We just couldn't have the time or the film. We can concentrate on those nice angle shots and the ...(unintelligible).

Mr. SCHOEDSACK: It would kill the average man in civilization, running up to get ahead of those tribes in that crisscross. And this was a trail of 14,000 feet and ...(unintelligible), but it was fun.

MOVSHOVITZ: Cooper and Schoedsack followed "Grass" with "Chang," a dramatic film made in documentary style in the jungles of what was then called Siam. Their next project was to be a documentary of sorts about gorillas, which they felt were a link between wild animals and humans. When the project stalled, they got a call from Hollywood producer David O. Selznick. He invited the two to make a fictional feature about gorillas; it became "King Kong." Bruce Kawin, a film historian at the University of Colorado at Boulder, says it was a perfect project for the two adventurers.

Professor BRUCE KAWIN (Film Historian, University of Colorado at Boulder): They were great pals and they had been going out into the world and, you know, their great desire was to find these wonderful, exotic things, and if they could, bring them back alive.

MOVSHOVITZ: Kawin says in their earlier projects, they realized they couldn't. But with "King Kong," the fictional adventurers could. In fact, it's widely known that Jack Driscoll, the shy sailor who falls in love with the Fay Wray character, is Schoedsack, and Carl Denham, the filmmaker who goes looking for King Kong, is Cooper.

Mr. ARMSTRONG: (As Carl Denham) Why the whole world will pay to see this!

Unidentified Actor: No chains will ever hold that.

Mr. ARMSTRONG: (As Carl Denham) We'll give him more than chains. He's always been king of his world, but we'll teach him fear. We're millionaires, boys! I'll share it with all of you!

MOVSHOVITZ: In an old interview from the Turner documentary, Cooper imagined himself as a another character.

Prof. KAWIN: I think they were going off to find some image of themselves in the world--if you can say that they made this voyage, or that imaginatively they made the voyage--so that they could find something that was deep, human, formidable, also lovable. And I believe that's how many of us on a good day may see ourselves and how they wanted to see them themselves.

MOVSHOVITZ: In fact, before they started the film, Merian Cooper had a profound experience. A friend of Cooper's and a trustee of the American Museum of Natural History in New York captured a pair of Komodo dragons in Indonesia and gave them to the Bronx Zoo. Both men considered the Komodo dragon a living example of the primitive spirit they so admired. But the dragons soon sickened and died, and Cooper wrote that civilization itself had killed them. Historian Gregg Mitman says Cooper used his reaction to the deaths of the dragons for the ending of "King Kong."

Prof. MITMAN: He began to think about the most iconic representation he could think of in modern civilization that would kill this noble beast. And so that's why he uses the Empire State Building and modern airplanes, because this was the symbol of the height of civilization which was destroying this symbol of this great force of nature.

Prof. KAWIN: He thinks that the flashbulbs are hurting the girl and all of that stuff. He needs to strike back at the people who are confining him, and eventually climbed to the tallest thing in the city, which would remind him of the highest mountain back on Skull Island. It's a way of coming from a state of complete--we call it disenfranchisement--to a state of power. And then, of course ,they go after him in those planes with Cooper and Schoedsack piloting one of the planes that gets him. And, you know, if you're up against the director and the producer, you don't have much of a chance.

MOVSHOVITZ: So Merian C. Cooper and Ernest B. Schoedsack turn up in the film as King Kong's fictional admirers and as the men who fly the plane that kills him, the human beings who use technology to wipe out the great noble embodiment of the wild. There are many speculations about why the story of King Kong has persisted through seven decades and two remakes. Perhaps it's because we still have the same conflicted relationship with the natural world. For NPR News, I'm Howie Movshovitz.