Accessibility links
The Cure for 'Donor Fatigue': Give Wisely How to make the most impact with your charitable contributions.

The Cure for 'Donor Fatigue': Give Wisely

The Cure for 'Donor Fatigue': Give Wisely

Residents of Pass Christian, Miss., sift through a sea of clothing donated for victims of Hurricane Katrina. Charity experts say Americans are increasingly concerned about making sure their donations are put to good use. Jeff Hall, Getty Images hide caption 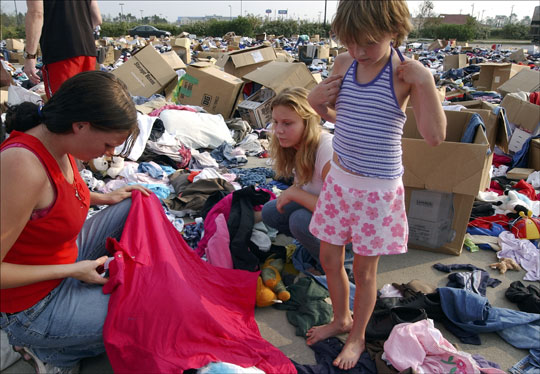 Residents of Pass Christian, Miss., sift through a sea of clothing donated for victims of Hurricane Katrina. Charity experts say Americans are increasingly concerned about making sure their donations are put to good use.

Know the difference between "tax-exempt" and "tax deductible."

Thanks to the Katrina Emergency Tax Relief Act, donors who make cash donations between Aug. 25 and Dec. 31, 2005 can reduce their taxes by counting the gifts against 100% of their adjusted gross income. The tax break — twice what's normally allowed — applies to all tax-deductible charities, not just for Katrina relief.

Fundraisers who call on the phone or come to your door are required by law to tell you who they work for and who they're raising money for, which are sometimes different if a charity pays an outside contractor for fundraising. Also, be wary of similar-sounding names, as some phony charities use names that mimic legitimate non-profits.

Don't give credit card numbers over the phone unless you initiate the call.

Legitimate charities who call you will happily follow up with a donation card or direct you to a Web site where you can give the information more securely.

Only respond to bills you ask for.

One solicitors' ruse is to send a pledge card or "bill" even if you didn't promise to pledge. You're under no obligation.

Be wary of sweepstakes.

Charities sometimes try to entice contributions with sweepstakes, which dilute your contribution by raising costs.

Write a check and avoid cash.

Checks leave a paper trail and aren't as easy to steal. Also, don't give to charities that ask you to wire money or give it to a courier, another sign of a possible scam.

Despite all they've already donated in this unprecedented year of natural disasters, Americans are expected to crank up their charitable giving in its final weeks. And with the help of temporary tax breaks favorable to big donors, charity experts say Americans will likely break their previous record for generosity and contribute somewhere north of $250 billion in 2005.

But as year-in-pictures photo spreads and news updates show landscapes from New Orleans to Sri Lanka still in ruins, a gnawing question lurks in the minds of many who hoped their hard-earned money would somehow help alleviate the suffering: Did my contribution make any difference at all?

Unfortunately, other than tracking down the folks your money went to help, there are few ways of knowing for sure. So NPR culled advice from charity experts on how to make the most impact with your charitable contributions.

How do I pick the right charity?

First off, you need to figure out who, exactly, you want to help. The vast majority of Americans give first to those closest to them: their churches, schools and local community groups. A substantial portion is also reserved for affinity groups, such as a widower whose wife died of breast cancer giving money to research for a cure. A far smaller percentage is given for causes overseas.

Experts suggest taking a little time to think about which causes are most important to you, then creating the same sort of portfolio you might with your financial investments. "You can put the bulk of your money into a basket of core causes, then take a little risk with new ones," says Stacy Palmer, editor of the Chronicle of Philanthropy. She notes that breakthroughs in everything from AIDS research to the idea of putting white lines on highways were made, in part, thanks to charitable donations.

Whichever charity you choose, "there's really no right or wrong decision," says Palmer, "as long as your money doesn't go to a scam artist or get caught up in administrative expenses."

Then how do I make sure my contributions aren't squandered?

Once you've figured out where you want your money to go, you should do some basic research on the organization before handing over the money.

At last count, there were more than a million non-profit charities registered with the Internal Revenue Service. All are required to submit a federal tax form -- Form 990 -- in which they list all expenses that don't go directly to charitable programs. Form 990 isn't the only source you'll want to base your decision on, but it offers key data on how much the charity spends on overhead, fundraising and compensation for its top executives. As a rule of thumb, the Charities Review Council recommends that at least 65 percent of revenues should go to charity programs, while charity experts say that no more than about 10 percent should be spent on fundraising.

Be wary, however, of charities that report zero fundraising expenses or count 100 percent of their revenues spent on charity activities, as such numbers show the organization's accountants probably aren't tallying for their expenses properly. "If you send one letter asking for money, you've at least spent 37 cents," notes Brian Telstad, chief financial officer for the Acumen Fund, a non-profit group that funds small businesses engaged in poverty projects. "So it's a red flag if you see a zero on the line for fundraising expenses."

So how do I get hold of a charity's tax returns?

If you ask for it, most non-profits will give you a copy of their Form 990. But you can also find the returns, along with other background information at www.guidestar.org, a non-profit Web site that collects information on more than 1.5 million charities.

My charity's tax return says the executive director makes $500,000 a year in salary! Isn't that a red flag?

Not necessarily. While $500,000 might seem like an outsized salary for an organization devoted to charity, "large non-profits are some of the most complex businesses to run," says Palmer, the Chronicle of Philanthropy editor. "They may have no choice but to pay top dollar to get the sort of management talent they need to operate effectively."

She and other experts say, however, that big salaries at small organizations should be scrutinized. "It's a big red flag if a charity that takes in a million dollars down is paying their director $200,000," says Palmer.

I don't have time to do a lot of research. Is there a faster way to tell if a charity is legit?

A growing collection of Web sites now rate charities based, in part, on information collected from their Form 990s. Among the best, say experts, is the Better Business Bureau's Wise Giving Alliance, which offers condensed reports on 500 national charities. Each is evaluated against the BBB's "Standards for Charity Accountability," which include four broad criteria: how well it governs its organization, how it spends its money, the truthfulness of how it represents itself to donors, and its willingness to disclose information to the public.

The BBB site "is the best at screening out the bad guys," says Brian Trelstad, who recently co-authored a comparative study of the largest charity rating sites. "But none are very good at helping you choose between two reasonably good charities."

Trelstad also tested www.charitynavigator.org, a non-profit site that features a star system for rating 5,000 charities. Its analysis is based entirely on data from the charities' federal tax returns, which it converts into pie charts and graphs that compare expenses and revenue/cost trends.

Another site, www.charitywatch.org, offers letter grades for 500 major American charities. Run by the non-profit American Institute of Philanthropy, it uses a proprietary evaluation system that takes into account such factors as "the cost to raise $100" and "percent spent on charitable purpose."

It's easiest for me to donate via the Internet. What should I watch out for?

According to a recent survey, the number of Americans who have donated online has grown by more than 50 percent, to 26 million people, since last year's tsunami. Improvements in Internet security software have made such transactions relatively safe. But there are still plenty of con artists ready and willing to steal your money, as a proliferation of bogus sites after Hurricane Katrina demonstrated.

One of the most common scams comes in the form of a Web site or e-mail appeal that lifts the logos from legitimate charities to dupe you into thinking they're the real McCoy. To be sure you're really giving to the charity you want to, experts say you shouldn't hit the reply button or click on hyperlinks in the e-mails you receive. Instead, go to your browser and type in the name of the charity. (Or if that doesn't work, try Googling the name.) "That way, you'll know exactly who you're dealing with," Palmer says.