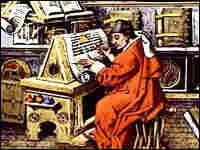 Detail from the cover of Misquoting Jesus: The Story Behind Who Changed the Bible and Why. HarperCollins hide caption

Scholar Bart Ehrman's new book explores how scribes -- through both omission and intention -- changed the Bible. Misquoting Jesus: The Story Behind Who Changed the Bible and Why is the result of years of reading the texts in their original languages.

Ehrman says the modern Bible was shaped by mistakes and intentional alterations that were made by early scribes who copied the texts. In the introduction to Misquoting Jesus, Ehrman writes that when he came to understand this process 30 years ago, it shifted his way of thinking about the Bible. He had been raised as an Evangelical Christian.

Ehrman is also the author of Lost Christianities: The Battle for Scripture and the Faiths We Never Knew, which chronicles the period before Christianity as we know it, when conflicting ideas about the religion were fighting for prominence in the second and third centuries.

The chairman of the religious studies department at the University of North Carolina in Chapel Hill, Ehrman also edited a collection of the early non-canonical texts from the first centuries after Christ, called Lost Scriptures: Books that Did Not Make It into the New Testament.

Read an excerpt from Misquoting Jesus:

The Beginnings of Christian Scripture

Judaism as a Religion of the Book

The Judaism from which Christianity sprang was an unusual religion in the Roman world, although by no means unique. Like adherents of any of the other (hundreds of ) religions in the Mediterranean area, Jews acknowledged the existence of a divine realm populated by superhuman beings (angels, archangels, principalities, powers); they subscribed to the worship of a deity through sacrifices of animals and other food products; they maintained that there was a special holy place where this divine being dwelt here on earth (the Temple in Jerusalem), and it was there that these sacrifices were to be made. They prayed to this God for communal and personal needs. They told stories about how this God had interacted with human beings in the past, and they anticipated his help for human beings in the present. In all these ways, Judaism was "familiar" to the worshipers of other gods in the empire.

In some ways, though, Judaism was distinctive. All other religions in the empire were polytheistic -- acknowledging and worshiping many gods of all sorts and functions: great gods of the state, lesser gods of various locales, gods who oversaw different aspects of human birth, life, and death. Judaism, on the other hand, was monotheistic; Jews insisted on worshiping only the one God of their ancestors, the God who, they maintained, had created this world, controlled this world, and alone provided what was needed for his people. According to Jewish tradition, this one all-powerful God had called Israel to be his special people and had promised to protect and defend them in exchange for their absolute devotion to him and him alone. The Jewish people, it was believed, had a "covenant" with this God, an agreement that they would be uniquely his as he was uniquely theirs. Only this one God was to be worshiped and obeyed; so, too, there was only one Temple, unlike in the polytheistic religions of the day in which, for example, there could be any number of temples to a god like Zeus. To be sure, Jews could worship God anywhere they lived, but they could perform their religious obligations of sacrifice to God only at the Temple in Jerusalem. In other places, though, they could gather together in "synagogues" for prayer and to discuss the ancestral traditions at the heart of their religion.

These traditions involved both stories about God's interaction with the ancestors of the people of Israel -- the patriarchs and matriarchs of the faith, as it were: Abraham, Sarah, Isaac, Rachel, Jacob, Rebecca, Joseph, Moses, David, and so on -- and detailed instructions concerning how this people was to worship and live. One of the things that made Judaism unique among the religions of the Roman Empire was that these instructions, along with the other ancestral traditions, were written down in sacred books.

For modern people intimately familiar with any of the major contemporary Western religions (Judaism, Christianity, Islam), it may be hard to imagine, but books played virtually no role in the polytheistic religions of the ancient Western world. These religions were almost exclusively concerned with honoring the gods through ritual acts of sacrifice. There were no doctrines to be learned, as explained in books, and almost no ethical principles to be followed, as laid out in books. This is not to say that adherents of the various polytheistic religions had no beliefs about their gods or that they had no ethics, but beliefs and ethics -- strange as this sounds to modern ears -- played almost no role in religion per se. These were instead matters of personal philosophy, and philosophies, of course, could be bookish. Since ancient religions themselves did not require any particular sets of "right doctrines" or, for the most part, "ethical codes," books played almost no role in them.

Judaism was unique in that it stressed its ancestral traditions, customs, and laws, and maintained that these had been recorded in sacred books, which had the status, therefore, of "scripture" for the Jewish people. During the period of our concern -- the first century of the common era, when the books of the New Testament were being written -- Jews scattered throughout the Roman Empire understood in particular that God had given direction to his people in the writings of Moses, referred to collectively as the Torah, which literally means something like "law" or "guidance." The Torah consists of five books, sometimes called the Pentateuch (the "five scrolls"), the beginning of the Jewish Bible (the Christian Old Testament): Genesis, Exodus, Leviticus, Numbers, and Deuteronomy. Here one finds accounts of the creation of the world, the calling of Israel to be God's people, the stories of Israel's patriarchs and matriarchs and God's involvement with them, and most important (and most extensive), the laws that God gave Moses indicating how his people were to worship him and behave toward one another in community together. These were sacred laws, to be learned, discussed, and followed -- and they were written in a set of books.

Jews had other books that were important for their religious lives together as well, for example, books of prophets (such as Isaiah, Jeremiah, and Amos), and poems (Psalms), and history (such as Joshua and Samuel). Eventually, some time after Christianity began, a group of these Hebrew books -- twenty-two of them altogether -- came to be regarded as a sacred canon of scripture, the Jewish Bible of today, accepted by Christians as the first part of the Christian canon, the "Old Testament." 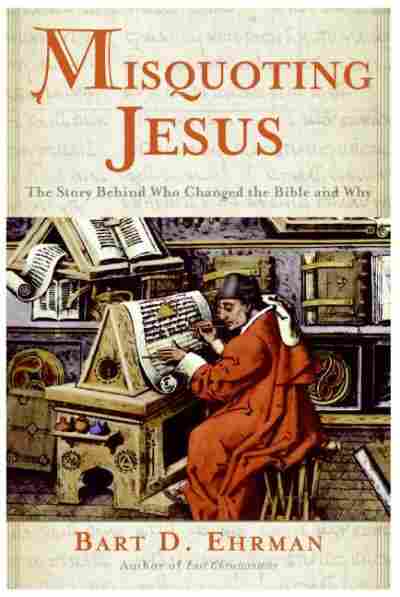 The Story Behind Who Changed the Bible and Why

Title
Misquoting Jesus
Subtitle
The Story Behind Who Changed the Bible and Why
Author
Bart D. Ehrman