Accessibility links
Violence Does Not Deter Millions of Iraqi Voters Millions of Iraqis vote in parliamentary elections amid tight security. There was some violence during the day, but it did not deter voters, who went to thousands of polling stations across the country in large numbers. The head of Iraq's Electoral Commission estimated voter turnout at 67 percent.

Listen
Violence Does Not Deter Millions of Iraqi Voters

Millions of Iraqis vote in parliamentary elections amid tight security. There was some violence during the day, but it did not deter voters, who went to thousands of polling stations across the country in large numbers. The head of Iraq's Electoral Commission estimated voter turnout at 67 percent. 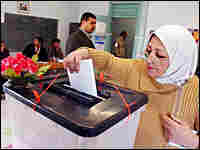 Of course, the other big story today is the election in Iraq. There was some scattered violence, but it did not deter voters from turning out in large numbers. NPR's Jamie Tarabay has an overview from Baghdad.

For once, the sound of endless honking horns and busy traffic on Baghdad streets was replaced by something quieter...

TARABAY: ...children playing soccer. The scene in Marjayun(ph), this Baghdad neighborhood, was different too. Families were out strolling on a sunny Baghdad day, all coming to vote.

TARABAY: Security was tight at this polling station, as it was everywhere else. Everyone was checked at least twice. Women had to leave their handbags at the door, and mobile phones--absolutely forbidden. It seemed every precaution was taken so people could vote in peace.

But peace is relative in Iraq. A mortar landed nearby, and US troops were called in to investigate the blast. For the most part, they remained in the background on election day, allowing Iraqi security forces to handle the streets. US troops appeared only in response to insurgent attacks. Major Elaine Conway(ph) is with the US 3rd Infantry Division.

Major ELAINE CONWAY (US 3rd Infantry Division): Well, we heard an explosion. There was a rocket attack that we heard earlier this morning. So just a couple explosions throughout the day. We heard it was one street over so we're calling up trying to get some more information on that.

TARABAY: There were also sporadic instances of violence in other parts of the country. A bomb in a trash can in the city of Ramadi killed one person. A number of mortar blasts were heard in Baghdad on election day, but they did not disrupt the voting.

TARABAY: At the Marjayun polling center, a widow and her daughter came to vote. As they did, the widow's six-year-old son dipped his finger into the indelible purple ink so that he, too, could be part of the day. The mood was celebratory.

TARABAY: The music sounded joyful and the message was clear. `Ali, Ali, Ali,' they sang, a reference to Grand Ayatollah Ali al-Sistani, the leading Shiite authority in the country. Some voters here worry that a victory for the leading Shiite Alliance might herald a theocratic government. Election worker Tara Sami(ph) voted for a secular candidate, former Prime Minister Ayad Allawi.

TARABAY: Iraqi Prime Minister Ibrahim Al-Jafari and his Shiite Alliance are expected to do well again in these elections. As he casts his ballot in Baghdad's Green Zone, Jafari said that by coming out today Iraqis are sending a message of hope that democracy will evolve and grow after so many years of war and dictatorship.

Prime Minister IBRAHIM AL-JAFARI (Iraq): (Through Translator) Success is when Iraqis vote in such hard circumstances and choose democracy and ballot boxes, not explosives, cast their ballots instead of using bullets and weapons. We consider this a victory.

TARABAY: Tonight in polling stations across Iraq, millions of votes will be counted. Then they'll all be shipped to Baghdad and be counted again. The final results may not be known for weeks. Jamie Tarabay, NPR News, Baghdad.