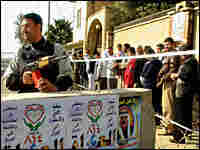 An Iraqi police commando guards a line of civilians waiting to cast their votes in the northen city of Mosul, Dec. 15. Mujahed Mohammed/AFP/Getty Images hide caption

Voting in the ethnically divided northern city of Mosul proceeds relatively smoothly. Sunnis and Kurds both go to the polls in large numbers despite sporadic violence.

Four bombs went off in the city on the east side of the Tigris river, including a satchel bomb near a polling station dropped off and detonated by a man on a bicycle. One Iraqi policeman was killed and two injured.