Accessibility links
Millions of Votes Counted in Iraqi Elections More than 70 percent of Iraqi voters are estimated to have taken part in parliamentary elections Thursday. Security remains tight after the vote and a curfew remains in place.

More than 70 percent of Iraqi voters are estimated to have taken part in parliamentary elections Thursday. Security remains tight after the vote and a curfew remains in place. 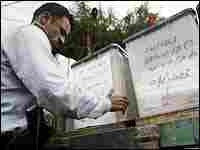 And I'm Steve Inskeep. It's believed that more than 70 percent of Iraqi voters took part in yesterday's parliamentary elections. Some polling stations were forced to delay closing in order to accommodate voters waiting to cast ballots. Now one day after the votes have been cast, security remains tight and Iraq is still in a virtual lockdown. We're going now to NPR's Jaime Tarabay who's covering the election and is in Baghdad.

And, Jaime, does it feel today as though some milestone has been passed?

Well, Steve, it's still, I guess, the quiet before the storm. There's still a curfew and the security measures that took place during election day are still in force. So it's hard to gauge just exactly what the sentiment is out there at the moment.

TARABAY: We don't have good figures yet, but it seems that they just came out in all the different areas including Anbar province, which is where the insurgents are very strong. They were in Mosul in the north, even in Tikrit, in Saddam Hussein's hometown, they turned out in force. There were complaints in Anbar province, actually, that they ran out of ballots in some places. And some complained that there weren't enough polling stations. Although we do need to mention that in Ramadi, which is in Anbar province, about a dozen polling stations weren't open because of those security concerns.

INSKEEP: Is it possible to have any sense today whether that relatively high Sunni Muslim turnout means that fewer people will be willing to support violent means in Iraq, the insurgency?

TARABAY: It all depends on the numbers in the end. A lot of the Sunnis who have connections to the insurgency have run as candidates, and then there is a Sunni, I guess, insurgency-influenced Sunni party that a lot of Sunnis have voted for. And I guess there is an implicit attitude from this party that if they get what they want or if they are catered to in a way that they'll be able to take care of the insurgency in their own way.

INSKEEP: And does this count as a free and fair election?

TARABAY: For the large part, I guess, it would be but then, you know, we are hearing instances of voter intimidation. You know, there were those complaints from the Sunnis that they didn't have enough ballots in some areas. We also had a report from Kurdistan of at least one incident where about a hundred militia walked into a polling station and voted, but they refused to get their fingers dipped in ink, which basically is meant to stop them from voting anywhere else.

INSKEEP: In the next couple of weeks, we'll find out precisely which parties won. There is some speculation about the possibility of a coalition government being necessary. Are politicians making the kind of statements that would suggest that they are ready to work together, different factions?

TARABAY: Well, they've all been touting, you know, reconciliation and how this election is the hope for the future and how it's all about one Iraq and all the rest of it. But you know, I think they're all hunkering down to see what the final vote count is. At the moment, the ballots are all counted at their individual polling stations, and then they're all being brought here to Baghdad to the official tally center. US and Iraqi troops are escorting these ballot boxes, you know, along the roads to bring them here. Then when they do, they'll be counted again. It gives the officials and observers an opportunity to look for any irregularities, and it also gives candidates and parties the opportunity to complain and issue formal protests against what they might have seen as election fraud. And it's because they have to investigate each one of those complaints that it's going to take time before the winners are announced.

INSKEEP: We've been talking to NPR's Jaime Tarabay in Baghdad. Jaime, thanks.

INSKEEP: And while the elections are over in Iraq, it will be months before their success can be judged. And if you want to find out more about why, go to npr.org.