Accessibility links
LaChanze and Celie: Tough Times in Common Actress LaChanze portrays the central character Celie in the Broadway production of The Color Purple. Like Celie, LaChanze has overcome hardship and challenges in her own life, as she tells Ed Gordon.

Actress LaChanze portrays the central character Celie in the Broadway production of The Color Purple. Like Celie, LaChanze has overcome hardship and challenges in her own life, as she tells Ed Gordon. 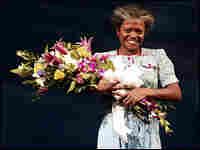 LaChanze at the curtain call for The Color Purple at the Broadway Theater on Dec. 1, 2005 in New York City. Peter Kramer/Getty Images hide caption

Since opening on December 1st, "The Color Purple" has become the hottest ticket on Broadway. The musical is an adaptation of Alice Walker's Pulitzer Prize-winning novel of the same name. I was among those fortunate enough to attend opening night, and I can tell you the energy in the theater was palpable. One of the reasons for that energy is the play's leading lady, LaChanze. The talented actress portrays Celie. Her character grows from an awkward 14-year-old incest victim to a 43-year-old self-assured and powerful woman. I asked the Florida-born actress what it takes to pull off such a transformation within the constructs of a musical.

LACHANZE (Actress): For me, the work was getting connected to Celie through the novel first, because I believe Alice Walker was sort of a conduit for this character. And I had spent a lot of time working on getting my hands on any material that she has ever written about this character. She has actually written her own version of what would have been a screenplay in a book called "The Same River Twice." And in that book she has a preface and description of each character, and I carried that for about the first year as my bible, and then I had the layer of the music, which is beautiful. These writers, these composers--Brenda Russell, Allie Willis and Stephen Bray--I'm fascinated by their ability to capture the emotion of this character and put it in song through a wide variety of styles, and it helped me to connect to the emotion of this character from the beginning.

GORDON: Was there any trepidation to take a character like Celie that's so emblazoned upon people's minds with the portrayal of Whoopi Goldberg in the movie and obviously of the book before that, or were you excited about the aspect of bringing what you would bring to the character?

LACHANZE: There are parallels in my personal story and Celie's story--not in the way that she was traumatized or in the way that she had her children taken from her, but more so in where we're from. I'm from a part of Florida that is very close to Georgia in the panhandle area. I have a very colorful Southern family. I have a very strong connection with God, very strong sense of my faith.

LACHANZE: (Singing) I feel like a dove. love has opened up my wings. Your heartbeat made my heartbeat when we share love.

GORDON: One of the parallels that you talked about--if you look at your life in adulthood, you were living a storybook life where you were in your career, had a loving husband, children, starting a family, and unfortunately your husband was killed in the World Trade Center attack. And then you had to live your life from that, and now, through the grace of God and strength of yourself, you've been able to remarry and restart your life. Talk to me about the emotions there that you've brought to this play.

LACHANZE: Well, the one parallel that I will say that's been constant for Celie and for me is my faith and the choices that I had. Celie didn't really have many choices. She couldn't afford to wallow in sadness, in self-pity and grief and loss. She would have died. She needed to survive, and the only way she could do that was to continue to take care of herself and do what was required of her immediately so that she could continue to go forward. Much like myself--I didn't have many choices. I was not able to crawl under my blanket and shrivel up and just let the world go on around me. I had a brand-new child; she was born six weeks after 9/11. I had to nurse my daughter and continue to take care of my one-and-a-half-year-old at the time. So in a way, the lack of choice was good. It was--in some ironic way, it was a blessing in disguise because I continued to keep moving forward.

GORDON: How difficult has it been for you to revisit on a fairly regular basis these kinds of stories based on the media always wanting what we call a good back story and knowing that you'd have to talk about something. While you don't want to forget your husband's memory, sometimes it can be painful to relive the stories out loud. Has that been difficult for you?

LACHANZE: First of all, just let me say how much I appreciate that question, OK, because so many times I'm often asked about this, and yes, it is difficult for me because I am a private person, and I like to deal with that privately but I'm also in the public eye, and this was a national tragedy. So I'm sort of stuck in the middle. I have to talk about it to a degree, but at the same time I don't want to talk about it as often as I have to because it is personal. And then there is the layer that I am happily married right now, and that part of my life I'm trying to live fully. And when I'm asked to revisit that area of my past, it robs me of my present sometimes, although my husband is very understanding and supportive of it and supports me even in my moments when I am grieving in the past for my children--more specifically these days. It does still take its toll. That's the thing.

GORDON: LaChanze, let me ask you: What's the hardest thing night after night to do? Is it to keep the emotions that you have to run through?

LACHANZE: Yes. That is the most challenging part of this job. It's to keep the depth of the emotion because in order to make you feel it I have to feel it every single night, and that's hard sometimes.

GORDON: And so you feel--we spoke with Alice Walker a few weeks ago--do you feel in your association with this play what she says, `the lineage of historical value of telling this story from the ancestors,' and as Oprah said, it spoke to her when she read it. Do you literally feel that?

LACHANZE: Every single night. It's amazing that it is that present--the spirit. I do feel that I am channeling. And I don't mean that to say, you know, in some sort of psychic way, but in a way that this character is speaking through me because it is that present and that close to me and that specific. This woman, this--what she embodies, what she represents in our history of the struggle, the pain, the weight that has been put on this young girl. Yet she's able to survive, and not only be healed but heal others is a huge part of our lineage, a huge part of our history. You know, the fact that you and I are talking today is proof that we are descendants of some very strong people. They survived the middle passage. I mean, the opportunity to do this is not only valuable and enriching for me; it is also important, I believe.

LACHANZE: (Singing) Is that me, I don't recognize. Love's the one thing I knew all right. I had it all figured out.

GORDON: Well, not that it needs it, since Oprah has put her stamp on it, but I will tell you this. After the play that night, Chris Tucker, Jamie Foxx and I were standing around talking and all of us said...

LACHANZE: I wasn't in that conversation.

GORDON: We were--none of us felt that we were big fans of musicals.

GORDON: But each and every one of us said without question this is a joy and a delight, and the cast is fantastic, so we are so very happy to have you as part of the show. We wish you luck with the run.

GORDON: And we know that in spite of being tired every night, you'll be glad you're there.

LACHANZE: I am. And I hope you will be too, those who come to see the show.

GORDON: Thanks for joining us.

LACHANZE: Thank you for having me.

LACHANZE: (Singing) And what about--what about love?

GORDON: LaChanze is currently starring in the Broadway production of "The Color Purple."

GORDON: To listen to the show, visit npr.org. NEWS & NOTES was created by NPR News and the African-American Public Radio Consortium.