Accessibility links
Excerpt: 'The Ice Harvest' Charlie had both hands resting on top of the wheel, trying to screw the cap back on the flask, when he caught sight of a police cruiser just behind him to the left, gaining slowly. He quickly gripped the steering wheel with his left hand and lowered the flask in his right, spilling a little bourbon on his pant leg. 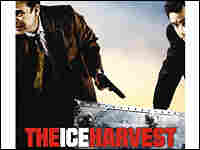 Detail from the cover of The Ice Harvest by Scott Phillips. hide caption

Charlie had both hands resting on top of the wheel, trying to screw the cap back on the flask, when he caught sight of a police cruiser just behind him to the left, gaining slowly. He quickly gripped the steering wheel with his left hand and lowered the flask in his right, spilling a little bourbon on his pant leg.

Read an excerpt from The Ice Harvest:

At four-fifteen on a cold, dry Christmas Eve a nervous middle-aged man in an expensive overcoat walked bare-headed into the Midtown Tap Room and stood at the near end of the bar with his membership card in hand, waiting for the afternoon barmaid to get off the phone. She was about forty, heavy in a square way, with a shiny face and dishwater blond hair that looked like she'd got s***faced and decided to cut it herself. He knew she'd noticed him coming in, but she was taking great pains to pretend she couldn't see him. To do so she had to stand at a peculiar angle, leaning her hip against the back bar and looking off toward the back door so that she was facing neither the lawyer nor the mirror behind her.

The only other drinker at that hour was a small, very slender young man in a fully buttoned jean jacket who sat leaning with his elbow on the bar, his cheek resting on the heel of his wrist with a cigarette between his index and middle fingers, its ash end burning dangerously close to the tip of his oily pompadour. His eyes were closed and his mouth open.

The lawyer unbuttoned his overcoat and stood there for a minute, listening to the barmaid's phone conversation. She had just the start of a drinker's rasp, and if he were just hearing her on the phone and not looking at her he'd have thought it sounded sexy. She seemed to be having some kind of roommate trouble involving a fender bender, a borrowed car, and no

insurance, and it didn't look as though she'd be noticing him anytime soon.

He couldn't remember ever seeing the Tap Room in daylight before, if the failing gray light filtering through the grime on the front windows qualified as such. It was a deep, narrow old building with a battered pressed-tin ceiling and a long oak bar. On the brick wall behind the

bandstand hung a huge black-faced clock with fluorescent purple numbers, and running the length of the opposite wall was a row of red Naugahyde booths. All of this was festooned with cheap plastic holly and mistletoe. Around the walls seven feet or so from the floor ran a string of multicolored Christmas lights, unplugged at the moment. This is my last look at this place, he thought, mildly surprised at the idea. He hadn't been out of town for more than two or three days at a time in fifteen years.

A squeal from the barmaid interrupted his reverie. "Jesus Christ, Gary, you set your hair on fire!" Young Gary looked up in cross-eyed bewilderment at the hiss of the wet rag she was patting against his smoldering forelock. He protested weakly and unintelligibly as she

snatched his cigarette away from him and ground it out in the ashtray, then put the ashtray behind the bar. "It's obvious you can't be trusted with these anymore," she said as she confiscated his cigarettes and lighter. He started to say something in his own defense, but stopped and closed his eyes again, resting his cheek back down on his hands. "You'll

get these back tomorrow," she said. "You want another drink?" Gary nodded yes without opening his eyes.

Now she looked up at the newcomer, feigning surprise. "Oh, hi. Didn't see you come in." She gave his membership card a perfunctory glance. "What can I get you?"

"CC, water back." She turned without a word and busied herself making his drink, following it with another for Gary. "Is Tommy in back?" the man said as she set the drinks down.

"Could you give him this for me?" He handed her an envelope.

"Sure," she said. She took the envelope from his hand and turned it over a

couple of times as though looking for a set of instructions.

"Tell him it's from Charlie Arglist."

"Charlie Arglist?" There was genuine surprise in her voice this time. She lowered her head, cocking it to one side, giving him a close look.

"Yeah . . ." At that moment he was certain he'd never seen the woman before in his life.

"Jesus, Charlie, it's me, Susie Tannenger. Wow, have you ever changed." She stepped back to let him get a better look at her. The Susie Tannenger he remembered was a lithe, pretty thing, at least six or eight years younger than he was. He had handled a divorce for her about ten years earlier, and in the course of the proceedings her husband, a commercial pilot, had threatened several times to kill Charlie.

She came around the bar and gave him a hug, a hard one with a discreet little pelvic bump thrown in. Her ex had had good reason to want to kill him; he had taken out his fee in trade, at her suggestion, on his desktop.

"Isn't life funny? Are you still a lawyer? Hey, Gary, check it out--this is the guy that did my first divorce!"

Gary looked up, focused for a split second, then grunted and returned to his private ruminations.

"Charlie, this is my fiance, Gary. S***, I didn't even know you were still in town; we gotta get together sometime."

"Yeah, we should do that." Charlie knocked back his drink and set a five-dollar bill on the table. "Well, I got some Christmas shopping left to do. Nice to see you again, Susie."

She swept up the bill and handed it back to him. "Your money's no good here, Counselor. Merry Christmas!"

"Thanks, Susie. Same to you." He went to the door. It was getting dark outside, and Susie hadn't yet turned the overhead lights on. From that distance, in that dim, smoky light, he almost recognized her. "And a happy New Year to you both," he said as he pushed the door open and stepped out onto the ice.

When the door closed Susie sighed and looked over at Gary, whose head had migrated down to the bar and who had started to snore. "There goes the second most inconsiderate lay I ever had," she said.

Who gives a s*** if I say good-bye to Tommy or not anyway? Charlie thought. He was warm and dry behind the wheel of the company car, a brand-new black 1980 Lincoln Continental, the finest car he had ever driven. He was headed west with no particular destination in mind. It was dark and overcast, one of those days where it was impossible to tell whether the sun was still up or not, but as yet it hadn't started to snow. He passed the Hardee's across the street from Grove High, watched the kids hanging around in the parking lot the way he had when he was in school, back when it had been a Sandy's. His kids wouldn't go to Grove, close as they lived to it; they'd be assigned to one of the newer and presumably nicer schools farther east. Good for them; f*** all this nostalgia crap.

He pulled a flask from the inside pocket of his overcoat and took a long drink. Now might be a good time to stop by the Sweet Cage; the afternoon shift would be ending, and there were a couple of the daytime dancers he wanted to see one last time. It was a little after four-thirty, and he had nine and a half hours to kill.

Charlie had both hands resting on top of the wheel, trying to screw the cap back on the flask, when he caught sight of a police cruiser just behind him to the left, gaining slowly. He quickly gripped the steering wheel with his left hand and lowered the flask in his right, spilling a little bourbon on his pant leg.

"Ah, s*** . . ." He looked down at the stain, just to the right of his crotch. "Looks like I pissed my f***ing pants." He looked up as he felt the car swerve, catching it at the last possible moment and swinging back into the right-hand lane. The black and white pulled up alongside him and Charlie looked calmly over. The cop on the right rolled his window down and Charlie did the same.

"Road sure is icy, Counselor," the cop shouted, his face pinched against the cold wind.

"Sure is, Officer." He tried to remember the cop's name.

"You're doing forty in a school zone, you know."

"S***. Sorry." Charlie let his foot up off the gas, and the cops slowed down with him.

"Never know who's gonna clock you around here, Mr. Arglist."

"Merry Christmas, guys." He held up the flask and drank them a short toast and they accelerated away, laughing and waving. That was a lucky f***ing break, he thought. He switched on the AM radio and rolled the tuner knob between thumb and forefinger until he found an adenoidal police reporter giving quick but detailed accounts of a fistfight in a tavern, a foiled daylight burglary, and a rash of car thefts at a local shopping mall. He closed his report with a message from the chief of police admonishing shoppers to lock their cars and take their keys. He was followed by an equally adenoidal country singer's bland, stringy rendition of "The First Noel." Charlie took another sip and wondered who the hell burgled in the daytime, on Christmas Eve yet.

Excerpted from The Ice Harvest by Scott Phillips, Copyright © 2000 by Scott Phillips. Excerpted by permission of Ballantine Books, a division of Random House, Inc. All rights reserved. No part of this excerpt may be reproduced or reprinted without permission in writing from the publisher. 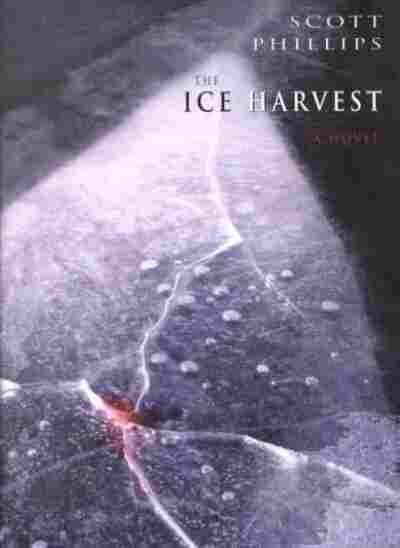