Accessibility links
Rumsfeld: Period After Iraq Election Critical Defense Secretary Donald Rumsfeld discusses Thursday's parliamentary elections in Iraq, the war and the eventual withdrawal of U.S. troops. He says much hard work lies ahead for Iraqis to build their own government and security forces.

Defense Secretary Donald Rumsfeld discusses Thursday's parliamentary elections in Iraq, the war and the eventual withdrawal of U.S. troops. He says much hard work lies ahead for Iraqis to build their own government and security forces. 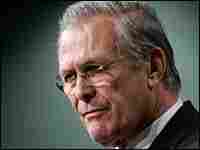 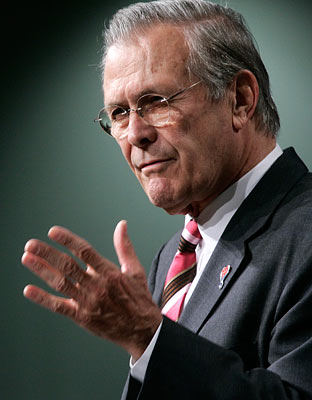 And I'm joined by Defense Secretary Donald Rumsfeld to talk about the war in Iraq and an eventual US troop withdrawal.

Secretary Rumsfeld, welcome to the program.

Secretary DONALD RUMSFELD (Defense Department): Thank you very much. I'm delighted to be with you.

BLOCK: Well, let's start with the question of troop withdrawal. Today General George Casey, the commander of forces in Iraq, confirmed that the two US battalions that were brought in to provide security for the elections will leave in January. You'd get back to your baseline, then, of about 138,000 troops. I'm wondering, beyond that, what specific benchmarks do you need to see that would allow for further reductions?

And the second most important thing in the period immediately ahead is to continue working with the Iraqi security forces and as they continue to develop greater capacity and capability, we continue to plan to drop--pass over responsibility to them for bases, for pieces of real estate. And they did the bulk of the work in this election, providing security. They now manage over half of Baghdad, which is an enormous city. And we'll just keep that process going, and as we do so, we'll be able to draw down US and coalition forces, one would imagine, depending on conditions.

BLOCK: You know that after the elections last year in January, there was a wave of attacks, and insurgent attacks lately have seemed to be growing more lethal, deadlier, more sophisticated. Would you anticipate the same thing after these elections, and wouldn't that complicate these plans for withdrawal?

Sec. RUMSFELD: Well, actually, the level of violence is down considerably from what it was during the January elections and during the October referendum on the Constitution. That's in terms of the numbers of attacks. You're quite right; the individual attacks have to some extent increased in lethality as we've gone through this period, as the terrorists have become somewhat more sophisticated in how they do things.

But, well, who knows? We'll see what happens as we go forward. The conditions on the ground, the president has pointed out, will be what will determine the level of forces that are required, and the success of the Iraqi security forces. I mean, it's their country. Over time, they're going to have to provide the security in that country. And the only question is: At what pace will that occur. And I must say, I've been very encouraged in seeing the success that the Iraqi security forces are having.

BLOCK: You mentioned a question about the pace of all of this. Do you have a timeline in the back of your mind?

BLOCK: Or the front of your mind?

Sec. RUMSFELD: For sure we know roughly the rate at which the Iraqi security forces have grown, from zero to 200 and--I don't know--20,000 right now, I suppose. And they're headed up to a much higher number. We know the pace--how long it takes to train them and so forth.

What you can't know precisely is the soft things, not how much equipment they have or how many troops there are, but how's the leadership, how are the non-commissioned officers, how are the junior officers? Is there a rib cage to that structure? Is the ministry strong enough to assure a competent chain of command? Those are the kinds of things that you can't quantify as such, and yet they're every bit as important as numbers.

BLOCK: Seems to me there's another complication here. We've been talking about the Iraqi army, the police, but there are any number of other security forces that come into play here. There are Interior Ministry squads that are running prisons where we now know that prisoners have been tortured. There are rogue militias that are going around in uniform, abducting and killing Iraqi civilians. What do you do about those?

Sec. RUMSFELD: Well, you say what do you do; the question is: What do the Iraqis do? It's their country, and they obviously are doing--with respect to the first point you made about these prisons, they're conducting an intensive investigation into the information that they've been provided, and they've announced publicly that they're going to hold people accountable for any wrongdoing in connection with the management of those prisons. And they're going to train people to conduct proper prisons, which is exactly what they ought to be doing.

BLOCK: But doesn't the US play some role in that?

Sec. RUMSFELD: Well, we--apparently the US has discovered that this was going on and reported it. The next step is that the embassy has indicated that they are part of an Iraqi team that is going out to investigate each one of them and then report back to the Iraqi government. To the extent they ask us to assist with training people in terms of managing detention facilities, obviously we'd be happy to be helpful.

BLOCK: And do those also complicate, then, the plans for US withdrawal?

Sec. RUMSFELD: You know, every one of your questions is looking at something that's a problem. And I'll tell you, we could have this program go on for 15 hours and discuss problems in a country like that. Life is far from perfect. I would say one thing. The election that just took place was historic. The turnout was enormous. The security situation controlled by the Iraqi security forces was done brilliantly. And the people for the first time had a chance to vote for somebody that they want to put in public office, and the votes are being counted and tabulated. And that is an enormous achievement.

I was with somebody the other day who's an expert on the country, and he said, `You know, the situation in Iraq is just terrible, but it's never been better.'

Sec. RUMSFELD: You might want to think about that. You seem to think the glass is half-empty. I would say that an awful--depending on your perspective, if you were an Iraqi looking at it and you saw all the schools open, you saw a hundred new newspapers, you saw 44 radio stations and dozens of television stations and you saw clinics functioning, people not being killed and put in mass graves, not sponsoring terrorism, you'd probably look at it a little different than you look at it. You might say to yourself, `My gosh, things are a lot better. We just have our own constitution. We just voted for it. We're now putting our own people in office. They're out there politicking. They're arguing; they're debating; they're discussing,' that's a thrilling thing to see.

BLOCK: There are also a large number of Iraqis--a majority, I think--who would like to see US troops out very quickly.

Sec. RUMSFELD: Well, of course. So would the majority of Americans. So would I. I don't know what you think about it. But the goal is not to stay over there. There are a bunch of people running around telling lies and saying, `Oh, my goodness, they're there to get their oil. They're there to stay there forever and occupy the country.' That's utter nonsense.

Sec. RUMSFELD: Well, you go to the FBI Most Wanted List and you'll see people who've been on there for 10, 15, 20 years. It's very hard to find a single individual. What we do know is the hunt for bin Laden and for Zawahiri, his number two, and for Mullah Omar goes on. And pressure is being put on there. If bin Laden's alive--and he very likely is--he probably spends about 9/10ths of his day trying not to be discovered, and he certainly isn't functioning very effectively. And it hasn't ever stopped, the look for bin Laden, and you must know that.

BLOCK: Is Iraq, though, a distraction from that hunt?

Sec. RUMSFELD: Iraq is the central front of the global war on terror. Look, you have to appreciate that in this world, there are a lot of Muslims and there are a handful, a very small number, who are violent extremists who are determined to re-establish a caliphate in this world stretching from Indonesia through the Middle East. And they are determined to have Iraq and to use that as their launching point. And to the extent they're successful, ours will be a dark world, let there be no doubt. And to the extent they fail, it will be a much brighter world and you'll have a democracy in an important country, a country that has oil and water, that has an important history and will be an example of democracy for other countries in the region.

BLOCK: Secretary Rumsfeld, thanks for your time.

BLOCK: Defense Secretary Donald Rumsfeld, speaking with us from the Pentagon.