Accessibility links
Senate Fails to Extend Key Parts of Patriot Act In a sharp blow to the Bush administration, a bipartisan group of senators blocks the extension of key provisions of the Patriot Act, which are due to expire Dec. 31. Critics say these elements of the act infringe too much on the civil liberties of U.S. citizens.

In a sharp blow to the Bush administration, a bipartisan group of senators blocks the extension of key provisions of the Patriot Act, which are due to expire Dec. 31. Critics say these elements of the act infringe too much on the civil liberties of U.S. citizens. 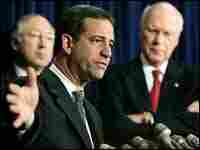 The White House is refusing to confirm or deny revelations that the National Security Agency eavesdropped without court warrants on people within the United States. The story was broken by The New York Times. It describes a secret presidential order signed in 2002. That order authorized the NSA to monitor e-mail and telephone conversations by people in the US believed to have links to al-Qaeda.

NORRIS: Normally, the NSA only carries out surveillance abroad, while domestic spying falls to the FBI. Both require court approval. At a photo op this morning, President Bush dodged questions about the NSA's domestic surveillance. In an interview taped today for the television program "The NewsHour with Jim Lehrer," the president also refused to comment directly, citing national security.

(Soundbite of "The NewsHour with Jim Lehrer")

BLOCK: In a moment, we'll hear about the history and work of the National Security Agency. First, in the US Senate today, news of domestic spying deepened opposition to extending portions of the USA Patriot Act. Those 16 provisions expire at the end of the month. Today the bipartisan coalition blocking the Patriot Act renewal defeated an effort to cut off debate. More from NPR's David Welna at the Capitol.

In trying to persuade senators to allow a vote on extending the Patriot Act, Senate Majority Leader Bill Frist equated the vote against it with cutting and running in Iraq.

Senator ARLEN SPECTER (Republican, Judicial Committee): I would say all in this body are concerned about civil liberties. But there is no mathematical equation where it can be established as to the balance between law enforcement and the balance as to civil liberties. And if you take a look at the specifics of this legislation, that balance has been achieved.

WELNA: But Specter acknowledged he had a tougher sell to make due to The New York Times report on the president going around the courts and ordering domestic surveillance.

Sen. SPECTER: On a morning when we come to have a vote on the Patriot Act, a little disconcerting to see these headlines; not very good publicity with a broad brush as to what the government is doing.

WELNA: The Judiciary Committee's top Democrat, Patrick Leahy, said he wanted to mend not end the Patriot Act by strengthening protections for civil liberties. Leahy and others mainly object to what they consider insufficient court review of government spying. They also oppose the remedies stipulated for lifting gag orders on such surveillance as being unrealistic. Leahy said The New York Times report on spying had only strengthened his convictions.

Senator PATRICK LEAHY (Democrat, Judiciary Committee): According to the reports it's being conducted under a secret presidential order based on secret legal opinions by the same Justice Department lawyers--the same ones who argued secretly that the president had ordered the use of torture. Mr. President, it is time to have some checks and balances in this country. We are a democracy.

WELNA: And New York Democrat Charles Schumer said that he had gone to bed last night undecided about whether he'd vote to sustain a filibuster of the Patriot Act extension.

Senator CHARLES SCHUMER (Democrat, New York): But today's revelation that the government listened in on thousands of phone conversations without getting a warrant is shocking and has greatly influenced my vote.

WELNA: And even though Judiciary Chair Specter was the chief sponsor of the Patriot Act renewal, he too expressed outrage over the news that the White House authorized spying.

Sen. SPECTER: It's inexcusable to have spying on people in the United States without court surveillance in violation of our law beyond any question, and I can tell you that this'll be a matter for oversight by the Judiciary Committee as soon as we can get to it in the new year, a very, very high-priority item.

WELNA: Four Republicans joined all but two of the Senate's Democrats in refusing to cut off debate on the Patriot Act renewal. Sixty votes were needed to cut off that debate. The GOP leaders were able to muster only 52 votes. New Hampshire's John Sununu was one of the four Republicans who voted to sustain the filibuster.

Senator JOHN SUNUNU (Republican, New Hampshire): We shouldn't be afraid of a judicial review or setting appropriate standards of evidence, and we should be mindful of Ben Franklin's words over 200 years ago: Those that would give up essential liberty in the pursuit of a little temporary security deserve neither liberty nor security.

WELNA: After the Republican leadership failed to bring the Patriot Act extension to a vote on final passage, Arizona Republican Jon Kyl warned that there could be a very high political price to pay.

Senator JON KYL (Republican, Arizona): For our colleagues to allow it to expire is to play with fire. It is to take the chance that terrorists will not act in that interregnum, in that period where the act falls and we're relegated to using the authorities that we had before September 11th.

WELNA: But Wisconsin Democrat Russ Feingold, who was the only member of the Senate to oppose the original Patriot Act four years ago, said it would make more sense to extend that Patriot Act another three months to reach a broader consensus on its provisions.

Senator RUSS FEINGOLD (Democrat, Wisconsin): That's the easy solution here, and any other suggestion by the White House or anyone else that we ought to just let these provisions elapse is irresponsible and dangerous for America.

WELNA: Nonetheless, Majority Leader Frist said he would not allow a three-month extension of the Patriot Act, and the White House made clear it too would oppose such a move. Frist said he would leave the legislation on the floor to be debated in hopes of winning more support for it. Judiciary Chair Specter said he doubted any minds would be changed. He said the reports of domestic spying had been very, very troublesome, if not devastating, for passing that extension. David Welna, NPR News, the Capitol.