Accessibility links
D.C. Program Brings Health Care to Homes of Elderly Anyone who's ever helped an elderly family member knows it can be hard to get good health care for someone who's sick and frail. In Washington, D.C., some doctors are trying to make health care work better by reviving what was once a common part of a doctor's practice -- the house call. 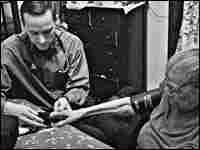 Dr. Eric De Jonge checks up on Nora Armwood, 94, in her home in Washington, D.C. One out of four patients in De Jonge's house call program are 90 or older. Photo by Ingrid Damiani hide caption

When Dr. Eric De Jonge sees patients, he gets in his Honda and drives.

De Jonge helps run the Medical House Call Program at the Washington Hospital Center in Washington, D.C. The program's team of doctors, nurse practitioners and social workers turn the delivery of medicine upside down. They go to the homes of frail patients, and bring with them a range of equipment -- from a portable X-ray machine, to the basic check-up tools that De Jonge stuffs into his physician's black bag.

"The House Call program is aimed at caring for the most ill, the most disabled and the vulnerable folks," De Jonge says.

"These are the people who have trouble getting to the doctor's office. So rather than wait for a disaster to happen, we want to bring care to them."

De Jonge is trying to prove that by going to patients' homes, he can provide better medical care -- and save money -- while caring for the sickest and most frail patients.

On one visit to Viola Hicklin, an 89-year-old woman in the terminal phase of Alzheimer's Disease, De Jonge not only checks his patient's health, but also gets an assessment from Hicklin's daughter, Pat: Her mother seems to be doing better since De Jonge arranged for staff from hospice care to start visiting.

Hicklin is more alert, and able to hold and cuddle her 2-month-old great grandson. If she keeps improving, she might not even need hospice care anymore.

"I never mind if someone graduates from hospice," De Jonge says. "That's always a good thing."

The frequent visits from the House Call team and hospice have made a difference. Her daughter says the fact that Hicklin can stay at home, surrounded by family, including her great-grandchildren, also helps.

"She acknowledges them and they acknowledge her," Pat Hicklin says. "She feels their love and their attention."

It takes much more than doctor's visits to keep a frail patient living at home. So the House Call team includes nurse practitioners and social workers, too. The staff meets once a week to review cases.

At one such meeting, Dr. George Taler, who co-founded the House Call Program, discusses a patient named Ruth who has dementia and schizophrenia and is in danger of being kicked out of her senior-only apartment.

"The problem is that her son was finally released from prison," Taler explains. "He has nowhere to go and moved in with mom in her senior apartment. He's not supposed to be there, because he's obviously not a senior. And he has been, I think, socially inappropriate to quite a number of people."

Taler says that because of her condition, Ruth doesn't understand that she'll get kicked out if her son doesn't leave. Taler and his team have negotiated with the building manager and city officials. They've talked to other family members. They're even trying to find a low-cost apartment for the son to move into. It isn't what your typical doctor gets involved in, but the house call doctors do.

"If you're going to maintain this population in the community, then if their living situation no longer works for them, it doesn't matter how well you manage their hypertension and diabetes," Taler says. "They're going to fail."

A Doctor at the Door: House Calls Make Comeback 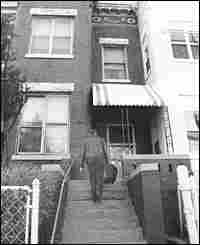 It seems like an image from a bygone era: A physician steps up to the front door, black bag in hand, to check up on a patient at home. But the number of doctors who offer this type of personalized medical care is actually on the upswing.

At-home visits from the doctor remain rare for most Americans, but the service is becoming increasingly available to the elderly. An analysis published last month in the Journal of the American Medical Association found that house calls to Medicare beneficiaries rose by 40 percent from 1998 to 2004.

Some physicians are affiliated with house calls programs begun in recent years by hospitals such as the Washington Hospital Center, which Joseph Shapiro profiles in a related report. But the practice has also been taken up by one-man practices and physicians groups, the largest of which is the Visiting Physicians Association, which works with more than 25,000 patients in Georgia, Ohio, Wisconsin, Texas and Michigan.

"A lot of people seem to think of house calls as something from a past era in medicine," says Dr. Steven Landers of Case Western Reserve University, who conducted the analysis. "But there are a lot of forces in the health-care system that seem to be making this service have a bit of a comeback."

Reviving Past Practice with a 21st-Century Twist

House calls were the norm for physicians until the end of the 19th century, when the rise of hospitals and health insurance and improved transportation led to a shift to the office-based practice. By 1971, only 1 percent of U.S. doctors were making home visits to patients. The travel time involved made them economically impractical, and medical practices became focused on seeing a high-volume of patients daily.

According to Landers, the recent return to house calls in part reflects Medicare's 1998 decision to boost what the government reimburses physicians for home visits by as much as 50 percent. For doctors, that made house calls less of a money-losing proposition.

And advances in technology have greatly expanded the arsenal of tools in a physician's black bag. Beyond stethoscopes, visiting physicians now bring along portable X-ray machines, laptop-based lung tests and EKG, and fingertip-based diagnostic devices that can test for a range of measurements, including blood sugar and blood count levels.

"The laptop that I take into patients' homes can be used as my electronic patient-record system," notes Landers, who directs the house call program at Case Western Reserve's department of family medicine.

A Grayer Patient Base

The renewed interest in house calls also reflects America's aging population. In 2004, some 36 million Americans -- 12 percent of the population -- were age 65 and over, according the U.S. Census Bureau.

The toll on health care spending is significant. A May 2005 study by the Congressional Budget Office found that the sickest 5 percent of Medicare beneficiaries -- the majority of whom have one or more chronic illnesses -- account for 43 percent of total spending, or some $142 billion a year, mainly because of hospitalizations.

These frail elderly are less likely to leave home for routine checkups and more likely to seek treatment only once problems have become exacerbated, resulting in more visits to the emergency room and hospitalizations.

"The reason they are in the shape that they're in is that they are relying so much on emergency room services," says Constance Row, executive director of the American Academy of Home Care Physicians.

Improving Health… and the Bottom Line

According to the Centers for Medicare and Medicaid Services, the average hospital stay for a Medicare beneficiary age 65 and over is nearly six days, at a cost of about $3,500 per day.

Previous smaller-scale studies have suggested that giving these patients better care earlier can reduce costs down the road. For example, a 2004 study of a house call program in Las Vegas found a 62-percent drop in hospital stays among 91 elderly patients, resulting in a net savings of $261,225 per year.

Dr. Eric De Jonge, who helps run the house call program at the Washington Hospital Center, says making home visits to his patients, who might otherwise call 9-1-1, has translated into significant cost savings.

"An urgent house call costs about $100. An ER visit with 9-1-1 calls costs about $2,000," De Jonge says. "On a day-to-day basis, making urgent visits and coordinating the care in the home is clearly going to prevent some of those high-cost events." And when elderly patients in the program are hospitalized, De Jonge says, they are discharged, on average, two-and-a-half days sooner than those not enrolled. In part, that's because staff from the program will check up on them at home.

In October, Medicare began a three-year pilot program to test the benefits of house calls on a national scale. The program involves 15,000 Medicare patients in Texas, California and Florida, who will receive free, 24-hour access to in-home care. Medicare officials will compare the medical records of those enrolled in the program to those in a control group to see whether house calls translate into cost savings and improved patient health.

The doctor's office remains by far the place where most people get their care. (Fewer than 1 percent of Medicare beneficiaries received a house call in 2004.)

Committing to home-based care can be difficult for physicians. Private insurers rarely cover home visits. And while Medicare increased its reimbursements for house calls, these payments don't cover the overhead costs of an office-based practice. So in order to turn a profit making house calls, doctors often must make them the exclusive focus of their practice and forego an office practice altogether.

"Its not that physicians in private practice don't know there's a need," Row says. "Everybody knows there's a need. Its just that they can't do it."

"I went into medicine because I like taking care of sick people and I like the challenge and reward of working with people," Landers says. "It's hard to do a good job in a high-volume office," Landers says. "You see 15 patients or more in any half-day. I was looking for a way to build deeper patient relationships."

The best part of his job now, he says, is getting to know the friends, family and neighbors that make up his patients' support network and community.