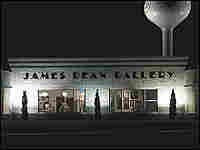 If you're traveling on Interstate 69 this holiday season, you might want to take Exit 59, Gas City, Indiana, to visit the James Dean Museum while you still can. Gas City is just outside of Fairmount, Indiana, James Dean's hometown, and the museum is closing its doors on December 31st because of financial troubles. The owner, David Loehr, joins us now from the museum.

Mr. Loehr, thanks for being with us.

Mr. DAVID LOEHR (Owner, James Dean Museum): Hi, Scott. It's nice to be with you.

SIMON: Just tell us what it's been like to run this museum for the past few years.

Mr. LOEHR: Well, I started collecting James Dean memorabilia in 1974, and in 1988, I moved to Fairmount, Indiana, James Dean's hometown, and we opened up the exhibit. But, you know, we weren't sure what to expect and the foot traffic just hasn't been enough to make it work and to keep the facility in operation, so after 17 years we're going to be packing it up. And for the time being I'm going to be putting it in storage, and we'll just see what the future holds.

Mr. LOEHR: Well, we have a six-room exhibit. It's the world's largest collection of James Dean memorabilia. We have a dozen pieces of wardrobe that he wore in the films, a little violin that he played as a young boy, his BB gun, original movie posters, books and magazines from all over the world.

SIMON: Is it--is there, if I might put it this way respectfully--is there anything else in the vicinity of Gas City that would inspire people to come there aside from the museum, so that they wouldn't have to build a whole visit around a museum but around several attractions?

SIMON: Why did you do it for so many years?

Mr. LOEHR: It's a passion. You can't pick out a James Dean fan. There's doctors and bikers and punk rock kids and country-western fans, and it's just been wonderful. And I feel good about it.

SIMON: For people listening to our conversation who don't want to give all three films a chance tonight but just one of them, which one would you choose?

Mr. LOEHR: Oh, boy, I would say "East of Eden." It's probably--all three are great, "East of Eden," "Rebel Without a Cause" and "Giant," but "East of Eden" is just so powerful. When I first saw it at a theater in Los Angeles, I just sat there and cried.

SIMON: So unless you sat on his knee when he played Santa Claus at the Gas City Christmas party(ph), you didn't know James Dean?

Mr. LOEHR: No, I grew up in Massachusetts. And I didn't even know anything about him until 1974 when I read a biography, and it changed my life. You know, I was a house painter in Los Angeles at the time. So know I'm sitting in this little Indiana town and I just love it. You know, it's a real nice pace of life here.

SIMON: David Loehr owns the James Dean Museum in Gas City, Indiana, which will close its doors on December 31st. But even after it closes, you can take a virtual tour on the Web site jamesdeangallery.com.