Listen
You Want to See 'The Producers' 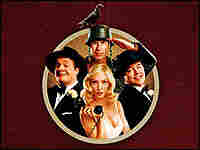 "The Producers," by Mel Brooks, has traveled an unusual road--from movie to musical to movie musical. There have been cast changes, script changes and form changes, but Bob Mondello says one thing has remained constant: It's funny.

Very broad, very boisterous, very 1950s, which is odd, since the original was set in 1968, "The Producers" is, as always, the tale of con man Max Bialystock and his timid accountant, Leo Bloom, who schemed to make more money with a Broadway flop than they ever could with a hit, starts to seem plausible when they come across the perfect script.

Mr. BRODERICK: (As Leo Bloom) "Springtime for Hitler," a gay romp with Eva and Adolf at Bertesgarten. Oh, my God.

MONDELLO: Script in hand, they go searching for a director who can do justice to this material and find Roger De Bris, who expresses in song what they think is the perfect approach.

Mr. GARY BEACH: (As Roger De Bris, singing) I see a line of beautiful girls, dressed as storm troopers, each one a gem, with leather boots and whips on their hips. It's risque, dare I say, S&M...

MONDELLO: As with everything in "The Producers" this number goes over the top pretty quickly. Gary Beach, like the leads Nathan Lane and Matthew Broderick, created the part on Broadway, where the trick is projecting to the back row. Susan Stroman, who directed them there, hasn't urged anyone to tone things down just because they're now in 40-foot close-ups. A first-time filmmaker, she takes her cues from those big Technicolor musicals Fred Astaire and Gene Kelly made back in the 1950s, everything bright and show-bizzy, just like the songs Mel Brooks wrote to expand his movie for Broadway. Everything gets expanded here again, so where on stage Nathan Lane led a dozen of his little old lady benefactors in a tap dance with their walkers, now he's leading maybe a hundred. And the vintage jokes are equally broad, as in this exchange between the leads and Ulla, their sexy Swedish receptionist, played on screen by Uma Thurman.

Mr. LANE: (As Bialystock) What time can you be here in the morning?

MONDELLO: Saw that coming, did you? Well, that's sort of the point. This may be the only musical comedy in which the jokes take at least as much brass to deliver as the songs, which is not to suggest that the musical numbers aren't fun, only that the music doesn't trump the laughs the way it often does on stage. Happily, the central joke is as tasteless and as funny as ever.

Mr. BEACH: (As De Bris, singing) It's "Springtime for Hitler" and Germany...