Accessibility links
Bush Defends Anti-Terror Tactics in Press Session In a news conference Monday morning, President Bush takes questions on topics ranging from Iraq to his acknowledgement that he authorized the National Security Agency to spy on Americans without a warrant after Sept. 11. 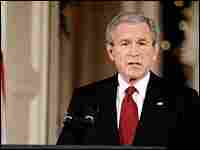 President Bush defends the legality of his decision to bypass the federal courts and allow federal agents to spy on Americans and others within the United States after terrorist attacks of Sept. 11, 2001.

He also was unusually candid about credibility problems created by faulty pre-war intelligence on Iraqi weapons.