Accessibility links
Teen Abuse of Painkiller OxyContin on the Rise About 1 in 20 high school seniors now acknowledges taking OxyContin, a prescription drug for managing severe pain that, when abused, can be powerfully addictive. The consequences can be tragic.

Listen
Teen Abuse of Painkiller OxyContin on the Rise 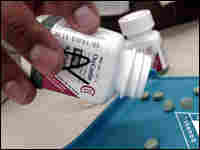 OxyContin can deliver a high similar to that of a heroin rush. Many teens who abuse OxyContin crush up the 12-hour time release pills and snort them, so they get hit with all the opiate at once. Darren McCollester/Getty Images hide caption 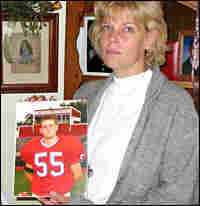 Cheryl Oates holds a photo of her son, Christopher, who died of a heroin overdose two months ago. Christopher turned to heroin after first becoming hooked on OxyContin. Chris Arnold, NPR hide caption

About 1 in 20 high school seniors now acknowledges taking OxyContin, a prescription drug for managing severe pain that, when abused, can be powerfully addictive.

Percentage of 12th graders who reported using OxyContin in the year prior to being surveyed: 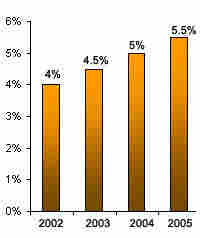 The use of OxyContin has risen by almost 40 percent among 12th graders since 2002. The powerful prescription painkiller can be highly addictive when abused. NPR Online/University of Michigan/2005 Monitoring the Future Study hide caption

Doctors say opiates like OxyContin are highly effective for treating pain. And patients are much less likely to get addicted if they use these drugs in just the dosage necessary to treat their pain.

But when a person starts taking opiates when they are not in pain, or in doses beyond what is required to treat their pain, doctors say the drugs have a different metabolic impact on the brain. In those situations, addiction is highly likely.

Many teens crush up OxyContin pills and snort them to get high, getting a hefty dose of opiate all at once when they are not in any pain to begin with. This form of taking in the drug is much more likely to lead to addiction.

In its annual survey of teen drug use, the National Institute on Drug Abuse reports that OxyContin use by 12th graders is up 40 percent nationwide in just three years. Five times as many 12th graders report using OxyContin than report using methamphetamine. The results have been tragic.

The rise of OxyContin abuse among teens is reported in "Monitoring the Future," the National Institute on Drug Abuse's annual survey of children in grades eight, 10 and 12. The study surveyed 49,347 students in 402 public and private schools. Among the report's other key findings:

— Half of all students today try an illicit drug by the time they finish high school.

— Overall, the report found a 19 percent decline over the past four years in the use of any illegal drug in the month before the survey was done.

— Decreases were seen in the past month, past year and lifetime use of methamphetamine among 12th graders and in lifetime use among 10th graders.

— Between 2002 and 2005, lifetime and past year use of inhalants increased among 8th graders.

— Between 2001 and 2005, lifetime and last-year use of steroids declined for all grades.

Prescription drugs are the second-most used drugs among teens, behind marijuana. Teens are doing stimulants, barbiturates and painkillers. Many don't realize how highly addictive and dangerous some of these pills can be -- OxyContin in particular.

"I was sick as a dog and I was in bed and I couldn't believe it. I was actually scared," recalls 17-year-old Ryan, a high school senior from Tewksbury, Mass.

Ryan, who asked that NPR use only his first name, is enrolled at a drug-treatment clinic at Children's Hospital in Boston. He says he first tried OxyContin at a party when he was 16. Kids crush up the 12-hour time release pills and snort them, so they get hit with all the opiate at once. Ryan says pot made him feel "weirded out." OxyContin just made him feel good -- warm and relaxed. And it's easy to get.

But just a week after he started using OxyContin, Ryan realized that if he didn't get a pill every day or two, he'd start to feel sick. So he kept using it. He says he had no idea how bad he was hooked until the next time he tried to stop.

"It was like somebody was inside of your head with a hammer," Ryan recalls. "You feel like you're going to die. Just laying there in the bed, sweat pouring off of you... Then five minutes later, you're freezing… then you'd be throwing up."

OxyContin is very expensive on the street: $80 for one pill. To pay for his habit, Ryan says he cashed $7,000 in savings bonds his aunts had given him on birthdays. He sold his PlayStation, leather jackets, cell phone -- everything he had -- just to stay high and keep from getting sick. He finally broke down and asked his parents for help.

Looking back on it, Ryan says he didn't think using OxyContin would be that dangerous because it was a prescription pill -- that made it seem safe. Many different kids at his high school were playing around with it, he says: "People from every sort of group -- the burnouts, athletic kids, the geniuses and, like, girls playing wicked-good softball [who were] offered scholarships to places -- they would be using it."

That sentiment is echoed by 18-year-old Mike, a recovering OxyContin addict in Winthrop, Mass. Mike says he was always an athlete and played football. Until his sophomore year in high school, he attended a prep school with wealthier students; he later transferred to the local public school. He says that, if anything, he saw more OxyContin at the prep school.

"All the popular kids -- that was the cool thing to do," Mike says. "It seemed like it was cool because it was so expensive, this big rich drug. And a lot of rich kids were doing it because the poor kids couldn't afford it."

OxyContin is so expensive that many teens turn to stealing to support their habit.

"I stole so much money from my parents," says Katie, 18, who is also a recovering OxyContin habit. She says she and a friend both stole their parents' ATM cards to support their habits. "I stole $5,000 from my parents in two months."

Katie also wrote checks from her mother's checkbook. Katie's parents say she and her friends stole cameras and jewelry from their house. Somebody stole her father's wedding ring out of his top drawer.

"It's like someone just punched you in the stomach," Katie's father said in an interview with NPR. "You know you're never going to get it back. And what did it get used for? The addiction."

Katie's parents say they feel lucky to still have their daughter. More than a year has passed since they enrolled her into a treatment program. She's relapsed twice. Doctors say OxyContin addiction can plague people for years.

And some users move on to heroin. It is much cheaper than OxyContin, and it satisfies the same craving. Instead of $80 a pill, heroin costs about $5 a bag around Boston. One night when Katie was getting sick and desperate, she called a women she'd used OxyContin with before whom she knew also used heroin.

All the teens interviewed for this story said they knew at least one young person who had overdosed and died recently either on OxyContin or on heroin after first getting hooked on OxyContin.

Cheryl Oates of the middle-class suburb of Burlington, Mass., knows the deadly repercussions of OxyContin addiction all too well. Two months ago, her 19-year-old son, Christopher, died of a heroin overdose.

Oates says her son was not the kind of teen one would expect to become a drug addict. He was a captain of his football and wrestling teams at Burlington High School and popular among his teammates. He got good grades and didn't have behavior problems, Oates says.

"He was the kind of kid who would walk through the mall with me and hold my hand," Oates says. "He didn't care what other people thought and said. Christopher was just his own person."

But by his junior year, Christopher was experimenting with Percocet, another opioid painkiller. It had been prescribed to him for a football injury. By his senior year, he and some friends were using OxyContin; they got hooked. Soon after he graduated, he started using heroin, too.

"The night before Christopher overdosed, we sat in the kitchen and we talked until three in the morning," Oates says. "And he said he knew he needed help. He was such a good kid and he loved so much. And he got grabbed by something that was greater than him."

Oates says she'd tell other parents to keep all prescription medications in a locked cabinet, just to make it harder for teens to start experimenting with them. She says it is frightening that more than 5 percent of high school seniors nationally now report using OxyContin in the past year.