Accessibility links
Timeline: Wiretaps' Use and Abuse Wiretapping is as old as the telephone itself. Thankfully, the laws to prevent its misuse are even older.

Timeline: Wiretaps' Use and Abuse

Timeline: Wiretaps' Use and Abuse 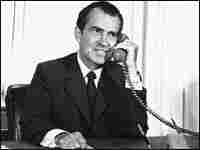 Congress tightened restrictions on wiretapping in 1978, in part as a response to revelations that former President Richard Nixon had used the FBI to spy on his domestic enemies. Corbis hide caption

Wiretapping is as old as the telephone itself. Yet the laws to prevent its misuse are even older.

That said, revelations that President George W. Bush authorized wiretaps without prior court approval have reopened a century-old debate over when electronic surveillance is allowable under the law.

The following timeline shows how wiretapping and other forms of electronic surveillance have come under increasing restriction after decades of abuse.

The amendment guarantees "the right of the people to be secure in their persons, houses, papers, and effects, against unreasonable searches and seizures." It stems from American colonists' anger over the British government's so-called "writs of assistance," which gave its customs officers broad rights to search colonists' homes, mostly in pursuit of smuggled goods. But the Fourth Amendment's roots go further back -- all the way to the British maxim that "a man's home is his castle."

With the message "What hath God wrought?" the telegraph machine dramatically speeds communication across long distances. The nation's telegraph system arises in 1844. The invention of the telephone follows in 1876. But since both mechanisms require multiple operators to relay messages and patch calls through, there is no way to guarantee privacy.

The first automatic telephone switching system, the "Strowger Selector" is invented by a funeral parlor owner angry because a competitor's wife -- who worked as a telephone operator -- was allegedly transferring calls for Strowger's mortuary to her husband's business. While the "Strowger Selector" cuts the operator out of the connection, it can't stop others from listening in by tapping into the line.

The first law to address the use of wiretapping, it states that "no person not being authorized by the sender shall intercept any communication and divulge or publish the existence, contents, substance, purport, effect, or meaning of such intercepted communications to any person …" The law, however, doesn't outlaw wiretapping, only the disclosure of information gathered during a wiretap. That allows government spies not only to continue the use of wiretaps, but to increase the practice.

1968: Senate Wowed by 'Bug in the Martini Olive' Trick

1967: Supreme Court Weighs in on Wiretapping

In Katz v. United States, a case involving a man convicted of transmitting gambling information on a payphone, the Supreme Court rules that the Constitution guarantees that "wherever a man may be, he is entitled to know that he will remain free from unreasonable searches and seizures. No less than an individual in a business office, in a friend's apartment, or in a taxicab, a person in a telephone booth may rely upon the protection of the Fourth Amendment." Still, the court allows for an exception in cases "involving the national security," noting that President Lyndon Johnson's administration has claimed a special right in such instances to conduct wiretaps without a warrant.

Inspired, in part, by Hal Lipset's unsettling demonstrations, Congress passes the Omnibus Crime Control and Safe Streets Act, the first federal law to restrict wiretapping: "To safeguard the privacy of innocent persons, the interception of wire or oral communications where none of the parties to the communication has consented to the interception should be allowed only when authorized by a court of competent jurisdiction and should remain under the control and supervision of the authorizing court." The law notes, however, the president's constitutional power to authorize such wiretaps "to protect the United States against the overthrow of the Government by force or other unlawful means, or against any other clear and present danger to the structure or existence of the Government."

1974: Plug Pulled on Nixon and his Plumbers

The House Judiciary Committee issues articles of impeachment against Richard M. Nixon, in part, for his role in authorizing wiretaps on 17 individuals, in a conspiracy to influence the outcome of the 1972 presidential election.

1975: Congress Gets an Earful at Church Hearings

Headed by Sen. Frank Church, a Senate committee looking into CIA and FBI intelligence operations hears a laundry list of abuses, including hundreds of warrantless wiretaps placed on antiwar and civil-rights leaders, such as Martin Luther King, Jr., as well as electronic surveillance of labor union leaders, student groups, newsmen and even former White House staffers and a U.S. Congressman.

Spurred by the abuses reported by the Church Committee, Congress passes new, more stringent restrictions on wiretapping, creating a legal review process to ensure wiretaps are focused narrowly on obtaining information essential for protecting national security. Under the law, a special court, the Foreign Intelligence Surveillance Court, is created to authorize wiretaps against "agents of a foreign power," even if they aren't suspected of a crime. Even though the law is meant to rein in abuse, it is viewed with great suspicion by civil libertarians, who argue that it undermines Americans' Fourth Amendment protection against unreasonable searches and seizures.

In the wake of the Sept. 11 attacks, Congress approves the U.S.A. Patriot Act to improve the government's ability to stop future terrorist attacks. It includes provisions to help streamline the process of obtaining the necessary warrants to conduct eavesdropping.

President George W. Bush authorizes a domestic spying program to thwart future attacks by monitoring communications by Americans and U.S.-based foreigners suspected of planning terrorist acts. Under the program, the National Security Agency monitors phone calls and e-mail traffic involving al Qaeda to and from the United States without first obtaining a warrant from a federal spy court. In classified memos, administration officials argue that such measures may be justified.

After holding on to information about the NSA eavesdropping program for a year, The New York Times publishes a lengthy story detailing an internal battle between government officials about the legality of the surveillance program. The story comes on the eve of a congressional vote to reauthorize portions of the USA Patriot Act, but Times editors say they had held the story due to national security concerns expressed by the Bush Administration. For his part, President Bush aggressively defends his decision to authorize the wiretaps and describes the leaking of information about the domestic spying operation as "a shameful act."