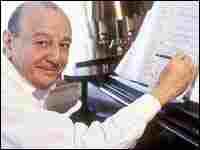 Record producer Arif Mardin, 73, has been the wizard behind the curtain for a wide range of pop, country, jazz, and R & B hits. Photo by Julie Mardin hide caption