Accessibility links
'Intelligent Design' Barred from Dover, Pa. Schools "Intelligent design" cannot be mentioned in biology classes in a Pennsylvania public school district, a federal judge said Tuesday. The ruling came in one of the biggest courtroom clashes on evolution since the 1925 Scopes trial. 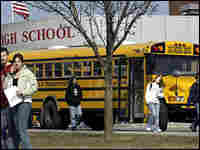 HARRISBURG, Pa. (AP) - "Intelligent design" cannot be mentioned in biology classes in a Pennsylvania public school district, a federal judge said Tuesday, ruling in one of the biggest courtroom clashes on evolution since the 1925 Scopes trial.

Read how the debate over teaching intelligent design is playing out across the country:

Dover Area School Board members violated the Constitution when they ordered that its biology curriculum must include the notion that life on Earth was produced by an unidentified intelligent cause, U.S. District Judge John E. Jones III said. Several members repeatedly lied to cover their motives even while professing religious beliefs, he said.

The school board policy, adopted in October 2004, was believed to have been the first of its kind in the nation.

"The citizens of the Dover area were poorly served by the members of the Board who voted for the ID Policy," Jones wrote.

The board's attorneys had said members were seeking to improve science education by exposing students to alternatives to Charles Darwin's theory of natural selection. Intelligent-design proponents argue that it cannot fully explain the existence of complex life forms.

The plaintiffs challenging the policy argued that intelligent design amounts to a secular repackaging of creationism, which the courts have already ruled cannot be taught in public schools.

The Dover policy required students to hear a statement about intelligent design before ninth-grade biology lessons on evolution.

The statement said Charles Darwin's theory is "not a fact," has inexplicable "gaps," and refers students to an intelligent-design textbook, "Of Pandas and People," for more information.

Jones said advocates of intelligent design "have bona fide and deeply held beliefs which drive their scholarly endeavors" and that he didn't believe the concept shouldn't be studied and discussed.

But, he wrote, "our conclusion today is that it is unconstitutional to teach ID as an alternative to evolution in a public school science classroom."

The controversy also divided the community and galvanized voters to oust eight incumbent school board members who supported the policy in the Nov. 8 school board election.