Accessibility links
Toyota Powers Ahead at Kentucky Plant General Motors and Ford are preparing to slash jobs and close plants, while foreign car makers like Toyota are continuing to build new ones in the South. Toyota's Georgetown, Ky., plant is booming -- and still non-union. 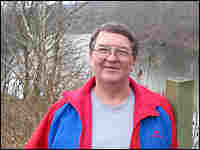 Leonard Habermehl is a skilled repairman who started at Toyota in 1990. He once thought unions weren't necessary. Now he'd like to see one at his Kentucky plant. Frank Langfitt, NPR. hide caption

While General Motors and Ford are preparing to slash jobs and close plants, foreign carmakers like Toyota continue to build new facilities in the South.

Targeting rural areas, companies from Honda to Hyundai have tapped an eager labor force in a region where it's easier to keep costs down.

Toyota -- now nipping at the heels of the world's largest auto company, GM -- built one of its first U.S. plants in Kentucky, where it started producing cars in 1988.

Brown grew up in Beattyville, a tiny, struggling town in the state's Appalachian coalfields. The town doesn't have many good jobs today.

Brown previously worked as an assistant manager at Dairy Queen, where she made $20,000 annually. Six years ago, she got a job at Toyota.

Now, Brown makes $70,000 a year -- more than twice the average manufacturing wage in the area.

The United Auto Workers have tried to crack the Toyota plant since before it opened. Last spring, they opened their own organizing office just down the road.

But Brown says that Toyota's wages are so close to the union's, she doesn't see the advantage.

That workers like Brown aren't interested in unions is no accident. Manufacturers like Toyota locate their plants in regions hungry for jobs with good salaries. It's the result of a strategy foreign car companies have used for years to avoid unionization.

Gary Chaison, who teaches industrial relations at Clark University in Masachussetts, says Toyota and its peers also try to treat workers well, take their opinions into account and give them a stake in the plant's success.

Despite the wages, some Toyota workers say they need a union. They complain the company drives them so hard that people get injured, and when they can't work anymore, Toyota pays them off to leave

Leonard Habermehl is a skilled repairman and makes up to $85,000 per year. When he came to Toyota in 1990, he didn't see why he needed a union. But after years of service in which he says he has seen people injured and forced out of their jobs, he now believes the plant should unionize.

The plant employs 7,000 people and is slated to build 340,000 Camry's this year. Next year, it will produce the new Camry hybrid, a point of pride among all employees.

Pete Gritton oversees human resources at the plant. He says attrition among workers is below 3 percent. He estimates about 15 workers leave because of injuries each year.

Gritton says the company tries to find them other jobs, but can't always make a match.

If organizing workers was tough before, Habermehl says it's even harder now with the UAW under seige. Ford and GM are looking to cut tens of thousands of jobs. Delphi, the world's largest auto parts maker, only recently backed off demands for union wage cuts of more than 50 percent.

Habermehl says future wages at Toyota depend on the UAW, whether plant employees realize it or not. When wages rise at the Big Three, they're also likely to rise at Toyota. And when they fall in Detroit's plants, Toyota could reduce them as well.

Habermehl isn't optimistic about unionizing Toyota. Once an activist, he doesn't spend as much time around the organizing office these days. He says the UAW is so distracted by the U.S. automakers, it probably won't be able to make a serious run at Toyota.