Accessibility links
Torme Gets Hip to 'Zaz Turned Blue' Musician and writer David Was recounts how the man who wrote "The Christmas Song," jazz crooning legend Mel Torme, was pursuaded to record one of Was' very unconventional tunes — a song that would later become part of Torme's act.

An Oddball, and a Classic

Torme sings the David Was composition, plus the "chestnuts roasting on an open fire" tune beloved for generations:

Mel Torme -- aka the Velvet Fog -- was an impressive singer, arranger, actor and author known for his impeccably smooth voice. He was also the composer of the holiday standard known simply as "The Christmas Song" -- the one that starts with the line: "Chestnuts roasting on an open fire..." 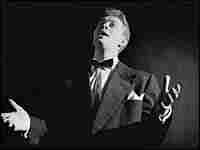 In the early 1980s, writer, musician and avid golfer David Was, co-founder of the oddball pop music group Was (Not Was), was working as a jazz critic and gave Torme a glowing review for a performance at the Hollywood Bowl. In gratitude, Torme called up Was to offer his services.

Was took him up on the offer in an unusual way: He convinced Torme to sing a song on an upcoming Was (Not Was) album. That song, "Zaz Turned Blue," was not destined to belong in the canon of great American tunes -- it was a quirky little number about a high school pal who fainted when another kid put the so-called "sleeper" wrestling hold on him.

It took some cajoling, but Torme agreed to cut the single. "Two weeks later, Mel and his pianist, Mike Renzi, would record a version that turned the maudlin tale of a wrestling hold gone wrong into something with the wry poignancy of 'Send in the Clowns,' recalls Was.

Torme eventually added the song to his concert repertoire, and it wound up on the four-CD Rhino Records boxed set of Torme's work collected a few years before his death in 1999.