Accessibility links
Hanukkah Lights and Latkes For no-nonsense foood writer Bonny Wolf, Hanukkah dinner is always the same: latkes and brisket. And no matter much brisket she makes or how many potato pancakes she fries, there are never any leftovers. 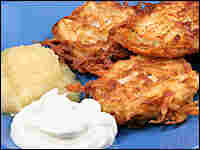 Potato latkes (above) and brisket make for a traditional Hanukkah dinner; there are never any leftovers at writer Bonny Wolf's house. Recipes below hide caption

Hanukkah commemorates a miracle involving oil. So a natural place to celebrate is in a frying pan.

After years of experimentation, I have settled on a huge, cast-iron pan for frying latkes, the traditional Hanukkah potato pancakes. It cooks evenly and retains heat. You also get a great workout, since it weighs a ton.

Every year, we have the same Hanukkah meal: latkes and brisket. I make a green salad, but it's fairly irrelevant.

Apparently, you can make latkes ahead and reheat them in the oven, but I think this is a bad idea. They'll never be as hot, as greasy or as crisp. (I do make the brisket in advance so I can skim off the fat that congeals after a day in the refrigerator.)

I once heard about someone who made what she thought would be healthier latkes by "frying" them in a pan coated with Pam. No one would eat them. For the right texture and flavor, latkes must be fried in oil. Period.

If the temperature is hot enough, the pancakes don't absorb much fat. I use peanut oil, which has the high smoke point desirable for frying. I have a friend who uses goose fat. That is really good -- and really rich. Whatever the medium, it should be about 1/2-inch deep to reach and keep the high temperature you need for crisp pancakes. If the oil starts smoking, turn down the heat. Note: Your house will smell like grease for about a month.

Some people like sour cream with their latkes. However, I think applesauce is even better. Jarred applesauce isn't bad if you heat it up and add a little cinnamon. But it's easy to make your own applesauce in the microwave. It's not only better, but prettier. I leave the skin on so the sauce has a pink tinge. You can also make a chunkier sauce if you do it yourself.

Everyone has an opinion on how to make latkes. Some people grate them by hand. These latkes really look like pancakes. I use the food processor with the thickest shredding blade. My latkes look like hash brown patties.

There are recipes for latkes made with apples, zucchini and sweet potatoes. Nothing is wrong with these additives. They just don't belong in latkes.

Then there's the question of type of potato. I think oblong baking potatoes (also called russet or Idaho) work best. They have less moisture than boiling potatoes, ergo, crisper latkes. I have eaten latkes made from store-bought mixes. They are a crime against man and a crime against nature.

For the record, Hanukkah is a minor holiday in Judaism: It's one of the few Jewish holidays not mentioned in the Bible. But it's a good story. In the 2nd century B.C.E., Judah Maccabee and his brothers defeated Hellenistic-Syrian King Antiochus IV, who was trying to wipe out Judaism.

When they chased the enemy out of Jerusalem, the Maccabees found their temple had been desecrated. They had only one small vial of untainted olive oil -- enough, they thought, to burn for only one day. But to their surprise, the oil lasted the eight days -- the time they needed to get more consecrated oil and rededicate the temple. This miracle is celebrated by lighting a candle for each of the eight days of Hanukkah and frying potato pancakes in boiling oil.

Over the years, the holiday's status has been raised by its proximity to Christmas. In fact, the tradition of gift giving at Hanukkah evolved so that Jewish children would get as many presents as their Christian classmates.

Nevertheless, it still is a lovely holiday, with feasting an integral part of the celebration. And no matter how much brisket I make or how many latkes I fry, there are never any leftovers.

I use this recipe from Joan Nathan's Jewish Holiday Kitchen (Schocken Books, 1979) every year for Hanukkah. It's her mother's recipe, and it's easy and delicious.

Preheat oven to 325 degrees. Place the meat in an ovenproof casserole, pouring marinade over meat. Cover with the celery leaves and onions.

Cover and bake for about 3 hours, basting often with marinade every half hour or so. Remove cover and bake for 1 more hour. (Allow approximately 1 hour per pound for roasting.) Meat should flake easily with a fork.

This dish is best prepared in advance so the fat can be skimmed easily from the surface. When ready to serve, slice and reheat in the strained pan marinade.

Vegetable shortening or oil for deep frying (I use peanut oil, but any kind of vegetable oil will do)

Pare and grate potatoes into a mixing bowl. Squeeze out liquid. Peel and grate onion into potatoes. (I grate both together in the food processor). Add eggs, flour and salt and stir to make a smooth batter that will drop heavily from the spoon. Heap the shortening in a heavy frying pan (use a heavy, cast-iron skillet for the best results), using enough to cover the pancakes amply -- about a 1/2-inch deep. Drop the batter from a spoon into the hot shortening, making pancakes about 3 inches in diameter. Fry over moderate heat until brown on the underside, turn to brown other side. Lift out and drain off excess fat on paper towel. Serve plain, with sour cream or applesauce.