Listen
A Conversation with Lynn and Vanessa Redgrave

Sisters Lynn and Vanessa Redgrave have a new film The White Countess — the first feature film they've ever appeared in together. They discuss how their relationship as sisters has helped them through years of performing on stage and screen. 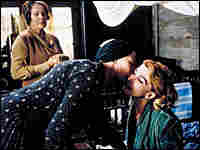 Lynn and Vanessa Redgrave have enjoyed long acting careers, but they've never made a feature film together until now. The two sisters, both in their 60s, play small but important roles in the new film "The White Countess." It's a Merchant-Ivory production set in Shanghai. Lynn lives in New York and Vanessa in London, but get these two together and radio studios across the Atlantic and even the sound check is entertaining.

Unidentified Woman: Is it London?

Ms. VANESSA REDGRAVE (Actress): I don't have any feedback.

Ms. L. REDGRAVE: That's good. You are a superior being.

NORRIS: Lynn and Vanessa grew up in an acting family. Their father, Sir Michael Redgrave, was a famous Shakespearean actor. Even so, Lynn said she didn't always aspire to a life on the stage.

Ms. L. REDGRAVE: I was an equestrian. That was my absolute passion. But I actually had a job lined up for when I left school with--there was a great international show jumper called Pat Smythe. She had offered me a job to be really like an apprentice, but I would get to work with her horses and with her, and I then had great aspirations to become Pat Smythe. And then I saw "Twelfth Night" and that all changed.

NORRIS: Vanessa, did you know at an early age that you absolutely wanted to be an actor?

Ms. V. REDGRAVE: I knew at an early age that I absolutely wanted to be a dancer, and I got accepted in the baby beginners class--I wasn't exactly a baby, but eight years old, a bit late to start--at the Ballet Rombert(ph). I didn't know, because my parents were very kind and didn't tell me, that they knew perfectly well that I was going to be far too tall to be a ballerina. And I, however, cherished this illusion for quite a long time. But then one day I discovered that, yes, indeed, I was definitely way, way, way too tall, even taller than my mother, who wasn't the tallest in our family. And I had a good cry about that and then I recovered because I realized, `Oh, well, I could be an actress and maybe dance in some of the future work that might come along my way.'

NORRIS: Vanessa, how tall are you?

Ms. L. REDGRAVE: And I was 5'10" but I've recently been measured and I'm 5'9" and it's just awful. Perhaps if we went on the space shuttle it would be--without gravity we'd be tall again.

Ms. V. REDGRAVE: Wow. Well, it's a wonderful relationship. That won't explain anything but it's--you asked me how I could describe it. I just adore her. I admire her massively and we can talk to each other very intimately about whatever's on our minds.

Ms. L. REDGRAVE: Well, all of those things. Vanessa--when I was a little girl, Vanessa was the dream sister. She made me a little--out of a shoe box she'd make a little room, almost like a stage set with little windows and illustrate little books for my dolls, and was generous beyond belief to me. I remember one Christmas--I was thinking of this the other day, V--one Christmas I collected little glass animals like Laura in "The Glass Menagerie."

Ms. L. REDGRAVE: I loved them and you were given a particularly beautiful, very long-legged sort of Bambi, a little deer, and I went in to you carrying my collection of glass animals. I went into your bedroom and was sort of skirted 'round the subject of deep envy for your Bambi. And I suppose I was maybe six or five, and you gave it to me. And then I dropped it. And I've never forgotten this. And you were so kind and so dear about it because I knew you loved your Bambi too, but because you knew it would mean so much to me you gave it to me, which is your generosity and sweetness.

So the wonderful thing about our relationship is now that we're in a later part of our life is that we--in many ways I feel we've come back to this wonderful sisterhood that we had as quite young children. And this became particularly true when I, three years ago, discovered I had breast cancer, and much of my recovery from that was thanks to Vanessa.

NORRIS: Vanessa, how did you help your sister in that period?

Ms. L. REDGRAVE: And I have a dog and she would take Natasha's little dog and hang out on a park bench several times a week, so much so that my dog still, when we pass the place where V used to come through into the park...

Ms. L. REDGRAVE: ...the meeting point and my dog makes a right-hand turn and tries to go there.

NORRIS: Lynn, you actually acted while you were undergoing chemotherapy.

Ms. L. REDGRAVE: Oh, I did, and radiation. I was back on stage four weeks after my mastectomy in "Exonerated" and then right into Alan Bennett's "Talking Heads," and that was absolute doctor theater for me.

Ms. L. REDGRAVE: We all--actors look on theater and work particularly as doctor theater because it is mind over matter once you're on stage. You know, you can limp to the edge of the stage with an injury to your leg. The minute you're out there you're not limping. It was psychologically, emotionally and also financially and health insurancewise was the best thing I could possibly have done.

Ms. V. REDGRAVE: ...in that "Talking Heads." I remember you saying to me that it wasn't until afterwards that you realized just how tired you'd been.

Ms. L. REDGRAVE: Yeah, yeah. About half an hour after the performance--you know, the adrenalin would keep me up--and then about half an hour later it was like I'd been hit with a truck. I think you recover quicker if you do stick to your schedule. It also makes you feel human. It makes you feel like you're not dying. It's a wonderful thing.

NORRIS: ..."Georgie Girl" and Vanessa for "Morgan." Was it hard to be in competition with each other in that way?

Ms. L. REDGRAVE: Well, it was lovely. I remember we kept being asked because the last set of sisters had reportedly--which was Joan Fontaine and Olivia de Havilland--had reportedly been a little at odds with each other, although I don't know whether that's true or not. That was just what was said. And, of course, it makes a better press story for sisters to be jealous and hate each other. Just not true. We were--we really couldn't believe that we were both going to the Oscars with our mom. And...

Ms. L. REDGRAVE: I think we all had to sit one in front of each other just in case one of us won. And, of course, Elizabeth Taylor won. So there you are; we didn't have our pla...

Ms. V. REDGRAVE: And I think we both knew that she would, didn't we?

Ms. L. REDGRAVE: We felt she would.

Ms. L. REDGRAVE: We didn't really--and I--you know, I think at the time one asks oneself `OK, if it isn't me but it is Vanessa or vice versa, how would that feel?' And I think we felt it would feel great.

NORRIS: Lynn Redgrave, Vanessa Redgrave, it has been a pleasure to speak with you. Thank you so much.

Ms. V. REDGRAVE: Thank you, Michele. Thank you very much.

NORRIS: Lynn and Vanessa Redgrave. Their latest film and their first feature together is called "The White Countess."

Unidentified Woman: (Singing) Bring out all the love you hide and, oh, what a change there'd be. The world would see a new Georgie Girl.

ROBERT SIEGEL (Host): You're listening to ALL THINGS CONSIDERED from NPR News.