Accessibility links
Executive Trades Business Attire for Santa Suit Greg Mohl has made the switch from globe-trotting executive to jolly holiday mall fixture. His new role is Santa Claus. He already looked the part and now he's part of a multimillion dollar industry. 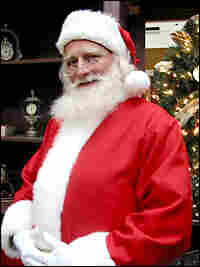 Greg Mohl as Santa Claus. The business of placing Santas in shopping malls so that children can have their photos taken with him is worth millions of dollars per year. Ketzel Levine, NPR hide caption 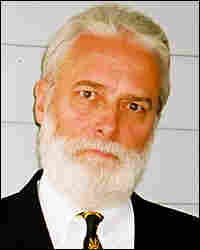 Before his transformation into the role of Santa Claus, Greg Mohl was a retired telecommunications executive. Jeannine Cordak hide caption

Greg Mohl was always a seasoned traveler. As an international sales vice president for a communications company, he was accustomed to criss-crossing the globe. But jets no longer serve his purpose, now that he travels in the world of the imagination. Greg Mohl has reinvented himself as Santa Claus.

Mohl retired early, at 57, with a sizeable stock portfolio. But during the dot-com bust, he lost half his savings. Two assets remained unchanged: a good head of hair and a thick beard. After signing a contract with The Noerr Programs, a multimillion dollar agency offering photo-ops with Santa, he is now making his debut at the Haywood Mall in Greenville, S.C.

Looking back over more than three decades working in management and sales for for companies such as AT&T, Bell Labs and GTE, Greg Mohl does see ways in which he's always been in training for his Santa career.

"As a manager, I'm used to reading people. And there's some of that in this job, too, only the people are a different size."

Mohl says he's in it for the long haul, though where he'll turn up next year is any child's guess.