Accessibility links
Baroque Pipe Organ on Display in Rochester A full-size Italian Baroque organ -- a 17th-century marvel with 600 pipes and more than 2,000 parts -- is on display at the University of Rochester's Memorial Art Gallery. It's the only organ of its kind in the Americas.

A full-size Italian Baroque organ — a 17th-century marvel with 600 pipes and more than 2,000 parts — is on display at the University of Rochester's Memorial Art Gallery. It's the only organ of its kind in the Americas. 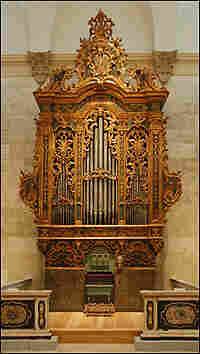 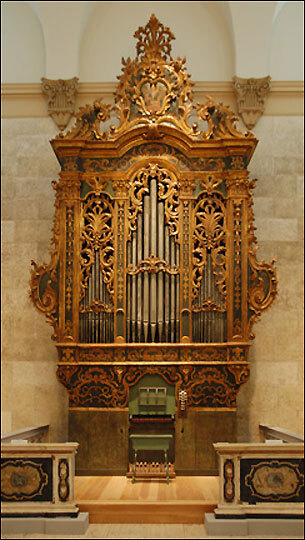 The organ is on display at the Herdle Fountain Gallery of the University of Rochester's Memorial Art Gallery. It almost ended up on the scrap heap.

(Soundbite of "A Christmas Pastorale")

That's part of "A Christmas Pastorale" written by Domenico Zipoli in the late 18th century. The music's being played on a huge antique organ. The instrument is owned by the Eastman School of Music in Rochester, New York. But before the school acquired it several years ago, the organ nearly ended up on the scrap heap. Producer Derek Rath has more.

That's the sound of a drum, a drum created on this beautiful Baroque Italian organ from the 18th century, a sound made by pulling a stop, one of the round nobs situated next to the keyboard. World-renowned organist David Higgs is the chair of Eastman's organ department. I sat in with him as he showed me some of its more unusual features.

Mr. DAVID HIGGS (Eastman School of Music): This Italian organ actually encompasses two centuries of organ design in Italy. We also, in the 18th century, had the addition of things like the nightingale stop...

RATH: Eighteenth-century special effects, as it were. For David Higgs, this organ is a window into the past.

Mr. HIGGS: When I first sat down to play this, the first thing that strikes you is the grooves that are in the keys worn down by a couple hundred years of use. And you wonder whose fingers were on these keys.

Mr. HIGGS: The real moment that sends shivers down your spine is when you first put your hands on these keys and feel your fingers going into these grooves of hundreds of years, and you feel immediately your connection with history.

RATH: That connection was almost lost. The organ, with an elaborately carved decorated facade and painted frescoes on its side, almost ended up as bits of furniture. Hans Davidsson, professor of organ at the Eastman School, explains how it was rescued from oblivion.

Professor HANS DAVIDSSON (Eastman School of Music): Oh, yeah. It was found by the German organ builder Gerald Woehl in 1979 a little outside Florence in an antique dealer's exhibit hall. And at that point, he had only assembled some of the carvings, parts of the organ that would be very easy to sell to people interested in arts, you know, to frame their paintings or mirrors perhaps.

RATH: Woehl instantly recognized what he was seeing and eventually persuaded the reluctant dealer to sell him the organ intact. After meeting with Hans, Woehl agreed to sell the organ to the Eastman college. It was crated and shipped to Rochester. Three and a half years later, the organ parts were assembled. Weighing 1,800 pounds, it stands 22 feet tall with over 600 pipes. It is the only full-sized Baroque organ in American.

RATH: This organ was complex for its time, with a tiny, four-octave keyboard, black ebony and dark brown boxwood keys and 12 organ stops and base foot pedals. Another renowned organist, William Porter, is also on the faculty at the Eastman School of Music, and shows how the special effects would typically be used in concert.

Mr. WILLIAM PORTER (Eastman School of Music): The nightingale is actually historically an image for the improvising performer. And it also gives a wonderful opportunity to play on this fabulous octave flute stop, which is just one of the most alive sounds that the organ makes.

RATH: As William Porter and David Higgs sit down to play, I'm struck that neither of these great organists have sheet music in front of them as you would expect at a Bach concert. It seems that this early Baroque music relies a lot on improvisation.

RATH: Another distinctive feature of this instrument is how the sound gets generated. It needs air, a lot of it. Two bellows the size of four sheets of plywood are housed in a room 30 feet away. Hans Davidsson steps from one to the other to keep the air pumping into the organ's lungs.

Prof. DAVIDSSON: Like the bellows that you have at the fireplace, you know, basically the same principle, but much larger. The board just compresses the air, sings by its own weight and the bricks that you have on top of it. And we have just chosen the number of bricks that give the right wind pressure. And then I have to tread on the other one...

Prof. DAVIDSSON: ...to makes sure that that is ready to go when the first one has emptied.

RATH: Do they need a score back here to know exactly when--how hard to pump or how frequently?

Prof. DAVIDSSON: They need to know what's going on, definitely, so they can adjust and pump a little bit harder when there is more consumption or wind.

RATH: For organist David Higgs, playing this 18th-century instrument inspires much more than hauntingly beautiful music. It evokes, for him, something eternal.

Mr. HIGGS: While it may sound a little bit silly, I thought one of the things that I would want to do, if I knew I was going to die tomorrow, would be to come and play this instrument for about an hour to feel that connection with my past.

RATH: For NPR News, this is Derek Rath in Los Angeles.

BRAND: And to see pictures of this incredible organ, go to our Web site, npr.org.

BRAND: More to come on DAY TO DAY from NPR News.