Accessibility links
'Munich': Spielberg's Most Provocative Film Yet Set after the massacre of 11 Israeli athletes at the 1972 Munich Olympics, Steven Spielberg's film, Munich, follows a secret Israeli squad assigned to track down and kill the 11 Palestinians suspected of having planned the attack. Critic Kenneth Turan says Spielberg's film is about the "murkiest, most divisive of real world issues."

Only Available in Archive Formats.
'Munich': Spielberg's Most Provocative Film Yet

Set after the massacre of 11 Israeli athletes at the 1972 Munich Olympics, Steven Spielberg's film, Munich, follows a secret Israeli squad assigned to track down and kill the 11 Palestinians suspected of having planned the attack. Critic Kenneth Turan says Spielberg's film is about the "murkiest, most divisive of real world issues." 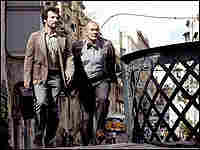 In 1994, director Steven Spielberg made two very different films back to back. He followed the audience pleaser "Jurassic Park" with the difficult and Oscar-winning "Schindler's List." This year he's done the same thing, following "War of the Worlds" with the controversial "Munich." Los Angeles Times and MORNING EDITION film critic Kenneth Turan has this review.

"Munich" is no small thing. It is the most questioning, provocative film director Steven Spielberg has ever made. It demands to be seen as much for its place in the world as for whether it succeeds. Spielberg, who once proclaimed, `I dream for a living,' has thrown himself into the murkiest, most divisive of real-world issues. The film focuses on Israel's retaliation for the Palestinian massacre of 11 athletes during the 1972 Munich Olympics. The film is also about the soul-destroying pervasiveness of killing and carnage and what that means for both nations and individuals.

Unidentified Man #1: It's strange, isn't it, to think of oneself as an assassin?

Unidentified Man #2: Think of yourself as something else then--a soldier in a war. I mean, you know how to shoot, to assassinate people, right? You make dolls in a toy shop, and you shop for sofas, and, you, I don't know what you do.

TURAN: Munich presents justifiable homicides but then refuses to allow us to enjoy them. It wants us to recognize that killing that starts out in righteousness can end up in madness. It is finally a desperate plea for peace. It is that desperation, that palpable sense of urgency about the need for that message right now that is simultaneously a strength of "Munich" and a source of drawbacks. For though this is a film that almost yearns for greatness, strains to reach it just over the horizon, it has not quite gotten there. "Munich" is an important piece of work, easily one of the year's noteworthy achievements, but it is a film that impresses us rather than sweeps us away, a film where significance overshadows filmmaking.

The central actions of "Munich" are the assassinations planned by a handpicked squad of Israelis. Hanging over the assassins is the constant question of whether they are doing the right thing, whether any of their targets actually had a hand in Munich and whether they should care about these questions or not.

Unidentified Man #4: From the beginning, it seems as though you were reluctant.

Unidentified Man #5: I was born reluctant. Ask my mother. If I can't kvetch, I can't do my job. Does that feel reluctant?

Unidentified Man #5: I knew guys like you in the army. You do any terrifying thing you're asked to do, but you have to do it running.

TURAN: "Munich" does see a kind of parallel between the Israelis and the Palestinians, not in their actions or strategies, but in their hopes and dreams. This has led to a pre-release rush to judgment against the film from the kinds of deep-thinking columnists and fulminators who usually find film beneath their notice. `No, no, no,' these people are insisting, `a quagmire in the Middle East is much too complicated for a simple filmmaker to understand.' But seeing "Munich" makes one wonder. Why is war always deemed the realistic response to a situation? Why is peace considered the province of innocence? Perhaps what "Munich" has to say and its ability to say it to the widest possible audience couldn't be more needed than it is right now.