Accessibility links
Robot Receptionist Dishes Directions and Attitude A team at Carnegie Mellon University in Pittsburgh is exploring how to make robots more engaging over the long term. Their assistant is roboreceptionist Marion "Tank" LeFleur. 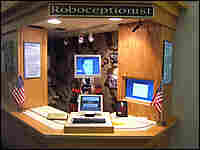 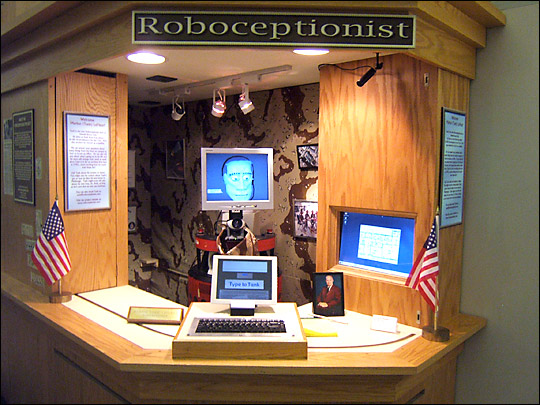 Tank is available to answer questions at his Carnegie Mellon post eight hours a day, five days a week. 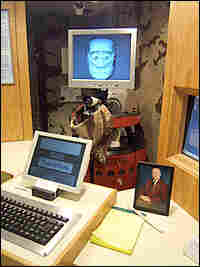 Tank is being used to collect data on how people interact with robots. Tank's boss, Reid Simmons, says his group now has a "tremendous amount of data" on human-robot interactions. Nell Boyce hide caption 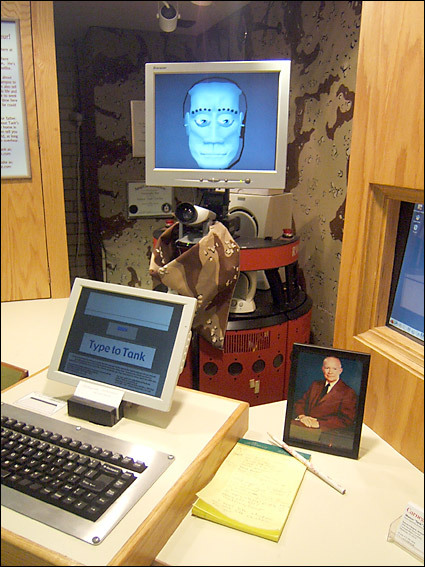 Tank is being used to collect data on how people interact with robots. Tank's boss, Reid Simmons, says his group now has a "tremendous amount of data" on human-robot interactions.

This holiday season, a lot of children will open their presents and find robotic toys, like mechanical dogs and dinosaurs. Unfortunately, robot toys often disappoint.

They're just so robotic, repeating the same things over and over again. But a team at Carnegie Mellon University in Pittsburgh is exploring how to make robots more engaging over the long term. Their assistant is roboreceptionist Marion "Tank" LeFleur.

Tank sits in the lobby of a computer science building, at a desk decorated with desert storm camouflage and a framed photo of Dwight Eisenhower. He has a computer monitor for a head. On the screen is a blue Frankenstein face. When his sensors register your presence, he smiles pleasantly and says, "Hello there. What can I do for you?"

Type on his keyboard and you can ask Tank the same questions you'd ask a real receptionist: Where is the bathroom? Where can I get some food? You can also ask Tank where to find the office of Reid Simmons, the computer science professor who created the robot. Then, try asking Tank what he thinks of Reid Simmons.

"Dr. Reid is my boss," says Tank, sounding wary. "I don't know him very well yet. Don’t you think he has shifty eyes? And, what's up with that hair?"

Tank's suspicions about his boss come courtesy of the university's School of Drama. It's all part of an experiment on how to make robots less boring. The answer, Simmons says, is simple: turn the robot into a soap opera.

Computer scientists turned to Carnegie Mellon's playwrights for Tank's back-story and motivations, then worked on ways to program it all in. Tank is their second robo-receptionist. The first was Valerie, a spunky Barbara Streisand fan. Simmons says that students and staff grew very attached to her.

"When Valerie disappeared after basically being here for two years, the number one question people asked was, 'Where's Valerie?' Number two was, 'Bring her back.'"

And Simmons expects people to get much more attached to Tank, even though Tank is kind of a pathetic character. He worked at NASA and failed as a satellite robot. A job at the CIA was also a bust. Tank seems kind of bitter about it all: "Everyone knows those government agencies all have quotas to fill. I was the token robot on staff," he complains in his synthesized voice.

Emotionally, Tank is a loser. But he's important to computer scientists who are trying to improve how machines interact with humans. If robots are ever to become part of daily life, acting as receptionists or cashiers, they'll have to respond naturally to human social cues.

Tank, for example, has a far more complex emotional life than Valerie ever did. If you insult him or bang on his keyboard, he gets angry, saying things like, "I cannot waste my time with you fooling around!" He also has mood swings, depending on what is happening in his life.

"It will be interesting to see if people feel sorry for him and are willing to do things to try to cheer him up," says Simmons. As an example, he types in "I love you!" This doesn’t impress Tank, who replies evenly, "You do not even know me."

Simmons says it's already clear that people will spend more time with a robot that has this kind of natural response. He and his team analyze the thousands of interactions that people have with the robot every month.

"It’s out there for eight hours a day, five days a week, collecting data about people's interaction with it," he says. "And we have a tremendous amount of data now on how people interact successfully or unsuccessfully with the robot."

People often ask Tank things he can't understand. Sometimes college kids just curse at him. Sometimes people ask for practical information, like directions or the weather report. But about 20 percent of the time, people are asking questions about Tank's life. That suggests that the soap opera approach is working.

And Simmons is planning upgrades that should encourage more chit-chat.

"What we want to do is, especially when there are lulls in the conversation, that Tank will take initiative,” he says. For example, Tank could make little comments like "Did you know my brother is getting married next week?" These volunteered remarks could trigger all kinds of questions and answers.

Simmons also wants Tank to start recognizing individuals using facial recognition software. Right now, Tank can detect if someone is standing in front of him, but he can't determine if it's someone that he's interacted with before. Simmons believes that if Tank is able to recognize people and seems happy to see them, then they just might be happier to see the robot.