Sunni Arab demonstrators take to the streets of Baghdad and other cities Friday, protesting alleged fraud in last week's parliamentary elections. Sunni political groups have demanded new elections for Baghdad province and are threatening to boycott the new parliament. 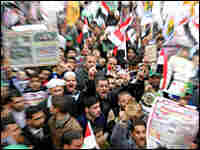 Iraqi Sunnis chant slogans during a demonstration after Friday prayers in the Iraqi city of Mosul, north of Baghdad, Dec. 23. Reuters hide caption

Thousands of Sunni Arabs took to the streets in Mosul and Baghdad today to protest last week's national elections. The votes are still being counted, but Sunni political parties and some secular groups are claiming that they have proof of vote rigging and election fraud. Though non-violent, the protests added to sectarian tensions in Iraq. NPR's Jamie Tarabay is in Baghdad.

It was the first Friday prayers Iraqis could attend after the security lockdown for the elections. It was also the first time since the war that Iraq's Sunnis have mounted a significant protest. In Baghdad alone, tens of thousands turned up. As American Black Hawks flew overhead, men, women and children gathered, holding signs attacking the Iraqi Election Commission and banners accusing the Shiite-dominated government of being puppets of Iran.

Group of Protesters: (Shouting in unison in foreign language)

TARABAY: At the rally, Sunni politicians announced their demands: a manual recount of ballots, a new round of elections in places like Baghdad where the Sunnis say the vote was rigged. They called on the United Nations to investigate their complaints. The UN has already said the election met international standards and doesn't think a recount is necessary.

Group of Protesters: (Shouting in unison in foreign language)

TARABAY: Sunni political leader Tariq al-Hashemi told the crowd that if their demands were not met, the Sunnis would reconsider participating in politics.

Mr. TARIQ AL-HASHEMI (Sunni Political Leader): (Through Translator) They gave us promises this election would be fair and transparent. We doubted it from the start, but still we joined so they would not say that we only refuse and reject elections.

TARABAY: But Hashemi also called for patience, asking the crowd to forgo violence. Iraq's Sunni minority forms the backbone of the insurgency. The US hopes the Sunnis will agree to form a coalition with the Shiites to curb fears of the civil war. But a coalition between the two groups is complicated by the reaction to the election results.

TARABAY: At a Shiite mosque on Friday, people congratulated each other on their success at the polls. From Shiite cleric Sheik Hamid el-Saidi's point of view, the Sunnis are behaving like sore losers.

TARABAY: Saidi vows the Shiites who are still suspicious of the Sunnis after decades of oppression under Saddam Hussein will never be threatened or degraded again. The men shout in reply, `No, we will not be insulted.'

Group of Men: (Shouting in unison in foreign language)

TARABAY: The refusal by the Sunnis and some secular groups to accept even the early election results is stoking fears that Sunni insurgents will again escalate attacks after a relative reduction in violence just before and after the voting. Western diplomats say complaints about the votes won't greatly change the final outcome.

TARABAY: Back at the Sunni demonstration, 75-year-old Abdel Hamid Nuemi(ph) stood in the middle of the chanting crowd. A retired employee of the old Baath-run Justice Ministry, el-Nuemi(ph) was unequivocal about what would come about if the Sunnis' complaints are ignored.

TARABAY: Then, as the crowd cheered, el-Nuemi lifted his hands in prayer and began to cry. Jamie Tarabay, NPR News, Baghdad.