Accessibility links
New York City Buses, Subways Back on Track The subways and buses are operating at full strength again in New York City. The country's largest mass transit system was back on schedule by Friday's morning commute, following an end Thursday to the three-day strike.

The subways and buses are operating at full strength again in New York City. The country's largest mass transit system was back on schedule by Friday's morning commute, following an end Thursday to the three-day strike. 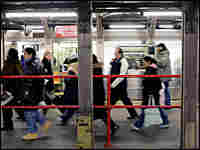 Passengers disembark from a subway train at the Times Square station in New York after a three-day strike, Dec. 23. Reuters hide caption

Today New Yorkers breathed a sigh of relief and boarded subways and buses with a little extra spring in their step to get to work and to catch up on holiday shopping. The country's largest mass transit system was back online after a three-day strike. NPR's Nancy Sullivan reports.

What a difference a day makes. Yesterday New Yorkers trudged across the city wearing comfy if stylishly challenged sneakers and knapsacks on their backs. Today it was back to shoes and boots, and by the lunch break, many were carrying huge overstuffed shopping bags. At the Toys "R" Us in Times Square, the aisles were jammed and the lines long.

Unidentified Woman #1: Will you tell us where there's any Spider-Man or Batman or...

SOLOMON: But many shoppers said they were just glad they could get there before Christmas. Terri Butler(ph) of the Bronx spent hours stuck in traffic to get to work in Manhattan during the strike.

Ms. TERRI BUTLER (Bronx Resident): I'm glad to ride a train. I'm--seriously. I never thought I would ever live to say that.

SOLOMON: Butler says she's not angry with transit workers, but she objected to the timing of the strike just days before Christmas. City officials feared the tourism economy would be hit hard this week, but there were plenty of tourists to be found waiting on line at the toy store. Ed Segwine(ph) arrived from Philadelphia last night with his family looking for the New York Christmas experience.

Mr. ED SEGWINE (Philadelphia Resident): My brother works in Manhattan. He had said we probably shouldn't come in, but we decided last night, let's just go. Staying in Times Square, we can at least walk around and get to see everything. And I'm glad we did. I mean, it really wasn't that crowded at all. Rockefeller Center was somewhat empty. We got to take pictures, and it was easy walking around with kids, so I'm glad we did.

SOLOMON: Even though the transit workers returned to their jobs without a contract, it appears that the crisis is over. A union official says negotiations resumed about an hour after the Transport Workers Union executive board voted to end the strike yesterday. Both sides have agreed to a gag order and won't comment about the talks, which focus on pension and health-care benefits. Another issue to be decided is whether the union will have to pay the million-dollars-a-day fines imposed by a state judge for going on strike. Also, workers were docked two days' pay for each day they were out.

Joshua Freeman, a labor historian at the City University of New York who has written a book about transit workers, says the union has broken a 25-year-old fear of a state law prohibiting public employee strikes and may have won.

Mr. JOSHUA FREEMAN (City University of New York): It looks like TW Local 100 may have succeeded in forcing the MTA and, I assume, the governor who was behind this from backing down on this effort to diminish benefits, particularly pensions and health care, for future generations of workers. If that in the end turns out to be the case, that will be quite an impressive achievement.

SOLOMON: Transit workers said they couldn't be interviewed while on the clock, but one woman standing on the platform at Grand Central Station said she was receiving a lot of support from riders. She hadn't been yelled at by angry commuters. The one negative reaction was a person who she says gave her the face. Nancy Solomon, NPR News, New York.