Blue Highway has been around for more than a decade. But the band is particularly hot at the moment. The CD Marbletown is topping the bluegrass charts and has been nominated for a Grammy. 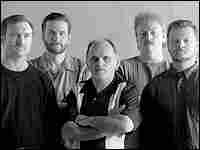 Members of Blue Highway have a hit CD on their hands. hide caption

The group performs a great deal of original material, which is not the case with all bluegrass musicians. Blue Highway's founder, guitarist Tim Stafford, and dobro player Rob Ickes tell Debbie Elliott what's behind the music.