Accessibility links
Character Actor Vincent Schiavelli Dies Vincent Schiavelli died of lung cancer Monday at age 57 in Italy. Schiavelli had memorable turns as a mental-ward patient in One Flew over the Cuckoo's Nest and as a science teacher in Fast Times at Ridgemont High. In 1997, Vanity Fair named him one of America's best character actors.

Vincent Schiavelli died of lung cancer Monday at age 57 in Italy. Schiavelli had memorable turns as a mental-ward patient in One Flew over the Cuckoo's Nest and as a science teacher in Fast Times at Ridgemont High. In 1997, Vanity Fair named him one of America's best character actors. 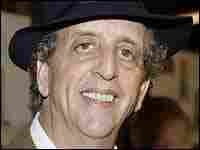 Schiavelli, seen here in 2003, had appeared mainly in Italian film and television in the last two years of his life. hide caption

The actor Vincent Schiavelli has died. He rarely received top billing in a movie. Yet again and again he appeared in memorable scenes. Schiavelli was one of the mental ward patients in "One Flew Over the Cuckoo's Nest." He was also a science teacher who seemed like he belonged in a mental ward in the teen-age classic "Fast Times at Ridgemont High." In one scene, Schiavelli's character takes students, including one played by Sean Penn, on a visit to a morgue.

Mr. VINCENT SCHIAVELLI: Now here, an incision has been made. The ribs have been sawed off, allowing us to remove the breastplate and really observe the human organs as they exist in their natural state. Here, we have the human lungs, and here is the human heart, which you can see is actually located in the center of your chest.

INSKEEP: That is, of course, Sean Penn at the end there.

Schiavelli's unusual looks made him especially effective playing demented characters. He had a big nose, droopy eyes, and a bald forehead, ringed by curly black hair. He was a valet in "Amadeus," the subway ghost in "Ghost" and much more. He was selected in 1997 by Vanity Fair as one of the United States' best character actors. Yet this man who so memorably conveyed the eccentric on screen had very different interests in life. Schiavelli wrote three cookbooks, and in 1998, he spoke with our own Daniel Zwerdling about growing up in Brooklyn in the 1950s.

Mr. SCHIAVELLI: In my neighborhood, you could walk down the street on Sunday morning and you could tell what town in Sicily people were from by the way the tomato sauce smelled coming out the window.

DANIEL ZWERDLING: So give me an example.

Mr. SCHIAVELLI: Mint, so you'd get this minty smell. In our town in our meat sauce, we put a little cinnamon.

INSKEEP: One more side of the life of Vincent Schiavelli, character actor and food writer. He died Monday of lung cancer at the age of 57.