Accessibility links
Wonder Bread Struggles to Stay Afloat Wonder Bread has fallen on hard times. Last year, the company filed for bankruptcy protection. This year, it closed eight bakeries across the country. Next month, you won't be able to buy Wonder Bread in Washington and Oregon. Phyllis Fletcher of member station KUOW reports.

Wonder Bread has fallen on hard times. Last year, the company filed for bankruptcy protection. This year, it closed eight bakeries across the country. Next month, you won't be able to buy Wonder Bread in Washington and Oregon. Phyllis Fletcher of member station KUOW reports. 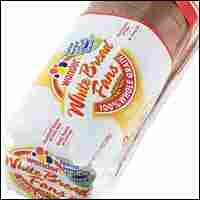 And it's time for business news. For the makers of Wonder Bread, the wonder years are over.

Unidentified Man #1: (Singing) Just a part of life in America...

INSKEEP: That's a commercial from the decades when white Wonder Bread was a symbol of wholesome goodness. It certainly was if you grew up in the Midwest. It was a staff of life. But it's fallen on hard times. Last year the company filed for bankruptcy protection and this year Wonder Bread closed eight bakeries across the country. Next month you will not be able to buy it in stores in Washington and Oregon. Phyllis Fletcher of member station KUOW reports on what's next.

If there's any place you can be sure to find Wonder Bread, it's a barbecue restaurant, like R&L Home of Good Barbecue in Seattle. R&L cashier Barbara Davis says the restaurant served its sandwiches on Wonder Bread for 45 years.

Ms. BARBARA DAVIS (Cashier): And one of the good things our customers liked was because the bread was always fresh. It was so fresh that the bread could absorb every little bit of ingredients, seemed like it, and it was very tasty.

FLETCHER: But R&L is already one of Wonder Bread's former customers. Wonder consolidated its bakery operations in Washington state a few years ago. The bread was harder for Barbara Davis to get, so she switched to a knock-off but it's not the same. Davis has loved Wonder Bread ever since she was a kid. Of course, it started with the packaging.

Ms. DAVIS: The little circle dots on the bread, you know, and then we found out that it helped build strong bodies, the calcium, the carbohydrates and whatnot. And it was the ideal bread back in the day.

Unidentified Man #2: Wonder, the bread that helps build strong bodies 12 ways. One squeeze tells you why people call us the fresh guys.

FLETCHER: Ah, back in the day, when everybody thought carbohydrates were good for you and Wonder marketed itself as a nutritious product that helped build strong bodies 12 ways.

Mr. TIM KREGOR (President, Spectra Marketing Systems): And the 12 ways referred to the nutrients that were in there, absolutely.

FLETCHER: Tim Kregor is president of Spectra Marketing Systems and a 23-year veteran in the food business. He says moms bought Wonder Bread for the added vitamins and minerals. For kids, it was all about the fun. It was just so squishy. They could mush it up into any shape.

Mr. KREGOR: Certainly roll it up in balls and eat it like a dumpling. Its very soft and malleable texture makes it something that is easy for kids to kind of play with and go ahead and eat.

FLETCHER: Did you ever do that?

Mr. KREGOR: Yeah. Well, you know, it was fun because it would all adhere together and children do play with their food. That just is, and as long as it's nutritious, I think the mom thinks, `Why not?'

FLETCHER: And therein lies the rub. Moms and dads today aren't so inclined to think Wonder Bread is good for you anymore, especially in the granola-eating, whole grain-buying Northwest.

FLETCHER: When was the last time you saw someone eat Wonder Bread?

Ms. SOBERS: I don't remember. I know it's not in my house anyplace.

Mr. KREGOR: You're certainly a leading indicator of the health and wellness and organic and whole grain kind of trend in eating consumption. And so I think you're probably ahead of the curve in that your consumption has shifted more dramatically toward the health and wellness oriented foods and thus away from some of the traditional foods and that would include Wonder Bread.

FLETCHER: And it turns out Wonder Bread's getting squeezed from two directions: whole grain competition on one side and cheap white bread knock-offs on the other. As the company tries to reduce its costs, it looks next to the Midwest. Wonder Bread will announce a plan to consolidate operations there in January.