Accessibility links
The Comforts of Soup Writer Christina Eng longs for the days when the weather turns wild. It provides the perfect excuse to make rich, satisfying soups -- and remember other places, other times.

The Comforts of Soup

The Comforts of Soup 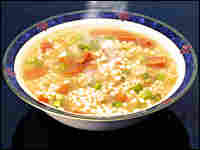 There's nothing like a steaming bowl of homemade soup to warm up a winter day. Recipes below hide caption

Christina Eng is a writer in Oakland, Calif. This is her first piece for Kitchen Window. She welcomes comments and suggestions.

When people in the Northwest talk about the incessant rain, I look out my window and curse the blue sky. More sun in California. I long for the wet winters in Oregon and the afternoons I spent years ago in my studio apartment cooking soup. A pot would last a week.

I am reminded of the energizing chill in that corner of the country, the smell of the air outside after a night of hard rain and the red scarf that helped to keep me warm. Soft and thick, it was one of my favorite items of clothing. It now sits neatly folded near the bottom of a dresser drawer, mostly untouched.

When friends in New England speak of the biting cold, I sympathize. They grumble about the low temperatures and slick pavements; I worry about their health and safety. But I envy them as well. When they describe the icy weather, I think of the small, cozy kitchens to which they will eventually return.

I imagine the steam rising from the bowls of soup they will undoubtedly enjoy: hearty chowders prepared with russet potatoes, chopped clams and heavy cream, spicy gumbos simmered with chunks of seafood, meat and vegetables. I get nostalgic for places I am not.

On cold days in the Bay Area, when close friends and neighbors complain about falling temperatures and increasingly wet roads, I smile surreptitiously. Deep down, I welcome the wild weather. Finally, there is an excuse to make soup. Craving things like split pea and barley, I eagerly dig into recipes collected from books and magazines.

One rainy afternoon, I consider making a pea and ham soup by Australian food writer Donna Hay or a squash, parma ham hock, sage, onion and barley broth from British chef Jamie Oliver. In the end, I settle on hamburger barley soup, made from a recipe given to me years ago by an older sister. It promises to be easy and satisfying, tasty and comforting.

First, I brown the beef. Ground turkey could substitute well, too; I make a mental note for the future. Using a pot instead of a frying pan helps to facilitate cleanup. Into that large pot, I add chopped tomatoes, tomato juice, water, vegetables, seasonings and barley, saving the carrots and potatoes for later. When things come to a boil, the heat gets turned down.

As the soup simmers, I work on other things. I write. I wander through the house, tidying up the living room and the bedroom. I flip on the radio. I surf the Internet.

Roughly 45 minutes later, back in the kitchen, now warm and fragrant, the colors in the pot are impressive: deep reds, dark and light greens, sprinkles of black. Carrots and potatoes go in next, giving the dish additional colors and textures.

While the ingredients continue to cook, I grab my keys, my coat and my red scarf, and head for the front door. I go for a walk around the neighborhood. The chill in the air outside keeps me alert. Life is good, I tell myself, wiping a raindrop from my forehead. And when I return home, there will be soup.

In a large pot, brown the ground beef. Drain completely. Return the meat to the pot. Add tomatoes, tomato juice, water, beans, bell pepper, celery, seasonings and barley, and bring to a boil. Cover, reduce the heat and simmer for 45 minutes to 1 hour. Add diced carrots and potatoes. Cook another 30 minutes, until the potatoes are tender, stirring occasionally.

Remove skin and fat from ham hocks. Place the ham hocks in a large pot. Add the water, bay leaf, chopped onion, carrot and celery, then cover and simmer for 20 minutes. Remove the hocks from the pan. Remove the ham from the bone and chop. Strain the liquid and discard the vegetables and bay leaf. Return the liquid and chopped ham to the pot. Add the split peas and simmer for 30-35 minutes or until soft. Stir through the salt, pepper and chopped parsley, and ladle into bowls.

British chef and food personality Jamie Oliver offers this recipe in The Naked Chef Takes Off (Hyperion, 2001). An Italian Parma ham, unlike a traditional smoked ham, is seasoned, salt-cured and air-dried. If a Parma ham hock cannot be found, a smoked ham hock will work here as well.

A pinch of dried chili and a pinch of nutmeg

In a large pot, slowly fry the onion, coriander seeds and garlic in a little olive oil until softened. Add the squash, sage, chestnuts (if you’re using them) and barley. Stir in the stock and add the Parma ham hock. Bring to a boil, then simmer for 1 1/2 hours.

Remove the hock, discard the bone if there is one, and break up the meat into small pieces with two forks and leave to one side.

Take half the soup and puree it in a food processor until smooth. Add the liquid and broken-up ham back to the pan. Season carefully with salt and freshly ground black pepper. Add a bit of chili and ground nutmeg if you like, to taste. Feel free to loosen with a little extra stock if need be.

Serve with a little peppery extra-virgin olive oil and some hot crusty bread.